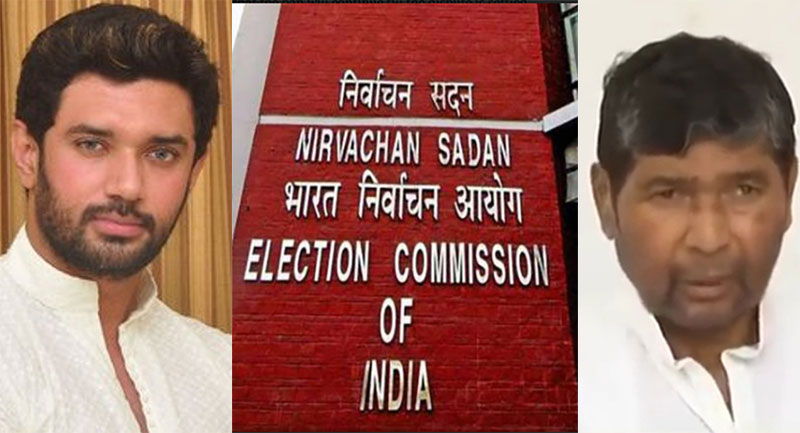 New Delhi/UNI: As the dispute between Chirag Paswan and Pashupati Kumar Paras continues over the presidentship of the Lok Janshakti Party (LJP), the Election Commission of India (ECI) has barred both the groups from using the name of the party and its symbol ‘bungalow’.

The Commission also said that the ban will continue till the dispute is settled.

"Neither of the two groups led by Pashupati Kumar Paras and other by Chirag Paswan shall be permitted to use the name of the Lok Janshakti Party and party symbol 'bungalow," the EC said on Saturday.

The poll panel in its interim-order which was issued taking into consideration the upcoming by-elections in Bihar further wrote, “Both the groups shall also be allotted different symbols as they may choose from the list of three symbols notified by the Election Commission for the purposes of the bye-elections in Kusheshwar Asthan and Tarapur Assembly seats."

The Commission has also directed both the factions to submit the names of three symbols in the order of their preference by 1300 hours on October 4.

Out of the three, anyone may be allotted to their candidates for the upcoming by-polls.

The last date of filing the nomination is October 8. Voting will be held on October 30 and the results will be announced on November 2.