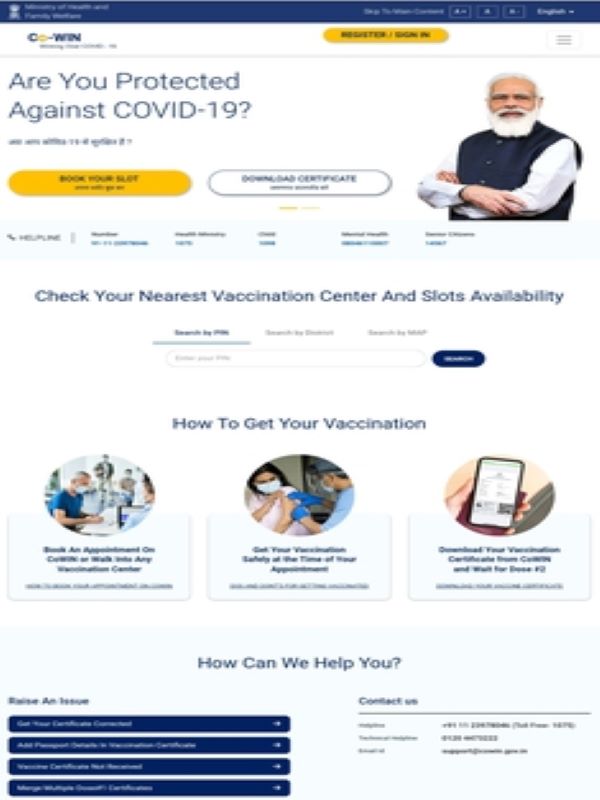 'No issues on CoWin with certification' : India's response over UK's concern

New Delhi/IBNS: India has dismissed the "vaccination certification issues" cited by the British authorities for not exempting Indians vaccinated with two doses of Covishield from mandatory quarantine on their arrival in the UK.

Despite recognising the India-made version of the AstraZeneca Oxford vaccine, the British authorities continue to impose restrictions on Indian travellers as they have doubts over vaccine certification in India.

Responding to the new sticking point, a top health official told NDTV there are "no issues" with the Indian vaccine certificate.

On Wednesday, United Kingdom approved Serum Institute of India (SII)'s COVID-19 vaccine, Covishield, after India said it has "right to take reciprocal measures" over the UK government's "discriminatory" decision to not recognise the Indian version of the AstraZeneca vaccine.

According to the site, from 4 am, October 4, those who have taken vaccines from a "relevant public health body" in the countries listed will be considered "fully vaccinated". However, the list of countries does not include India.

The updated UK travel guidelines say, "Formulations of the four listed vaccines, such as AstraZeneca Covishield, AstraZeneca Vaxzevria and Modern Takeda, qualify as approved vaccines." The site explains that from 4 am, October 4, those who have taken vaccines from a "relevant public health body" in specific countries will be considered "fully vaccinated". That list does not include India.

This suggests that Indians vaccinated with two doses of Covishield, produced by Serum Institute of India (SII), will have to meet the quarantine requirements even though India is now on the Amber list.

Speaking to NDTV, British High Commissioner to India Alex Ellis said, "India is still on the Amber category because there are still some COVID-19 cases in India. Most other nations on the list that do not need any quarantine are in the green category, where the number of active cases are very low in comparison."

"While Covishield is approved, the UK government is still trying to understand how the Indian Covid vaccine app works. And let me assure you, that this is a two-way process. We are also letting India know how the UK government Covid app works. Once we understand this better and know that it is absolutely safe, we can go ahead and remove the quarantine for Indian travellers," he said.

A British High Commission statement yesterday said: "We are engaging with the Government of India to explore how we could expand UK recognition of vaccine certification to people vaccinated by a relevant public health body in India."

In India, recipients of the two doses of Covishield vaccine, are certified through a centralised national system managed through the CoWin app and portal.

National Health Authority CEO RS Sharma has dismissed the doubts raised by British authorities over the vaccine certification in India.

"There are no issues on CoWin with certification... system is entirely WHO compliant. We continue to have discussions with International Civil Aviation Organization. The UK High Commissioner visited me on September 2. They wanted to understand the system... technical aspects," Dr Sharma told NDTV.

"A resource has been allocated and two further conversations have happened with their team. These were technical-level conversations," he explained.