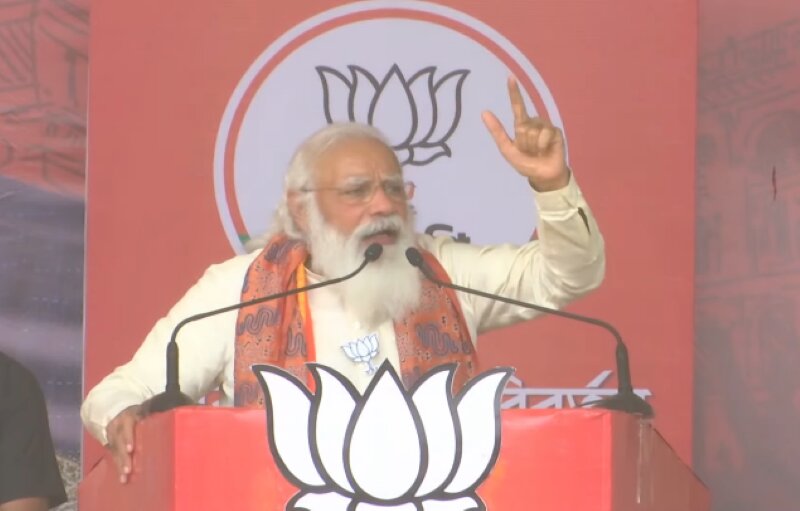 At a rally in Bardhaman, Modi said, "In the four phases, the TMC has been wiped out by people. People have hit so many boundaries and over-boundaries that the BJP has slammed a century already."

After the third phase of the elections, Union Home Minister and BJP strongman, Amit Shah had claimed the saffron party won 63-68 of 294 seats.

Important to note, the majority mark in the 294-seat assembly is 148.

Modi, who is the main campaigner of the BJP in the ongoing elections, on Monday slammed the ruling Trinamool Congress (TMC) over its leader Sujata Mondal Khan's comment where she called Scheduled Caste (SC) people as "beggars".

"Neither Mamata Didi condemned the comment nor did she react to it. Her silence indicates her support to her leader's insulting remark on Dalits. People won't forget such an insult," the Prime Minister said, in strong words against West Bengal Chief Minister and TMC chief, Mamata Banerjee.

On the day of the fourth phase of elections on Apr 10, Sujata, who was also a TMC candidate, said, "Mamata Banerjee has done so much for the Scheduled Castes but still they are not satisfied. They are still selling their votes to the BJP. The Scheduled Castes are beggars by nature."

In a rather taunting remark, the Prime Minister added, "Didi, you vent your anger upon me. Abuse me as much as you can but don't lower the culture of Bengal."