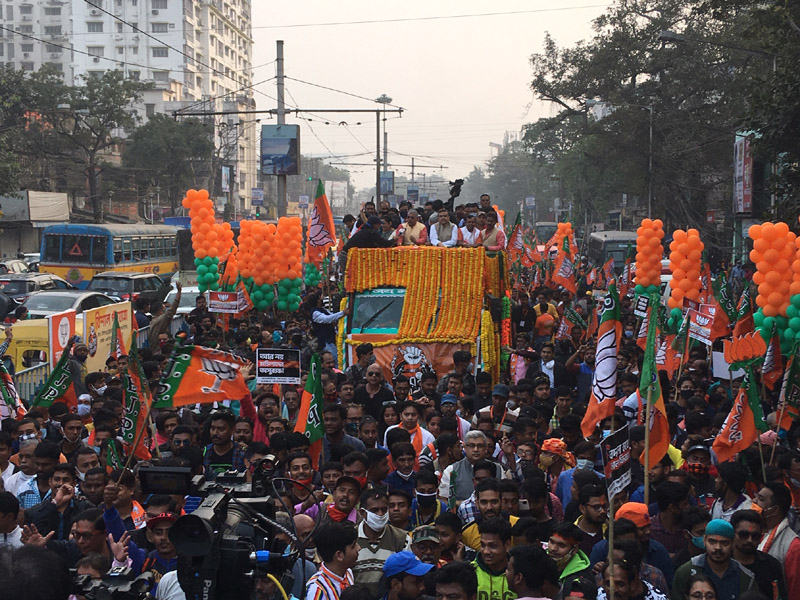 Reacting to the incident, Adhikari tweeted: "Absolutely horrific scenes in the heart of the City of Joy! Anguished to share that criminal elements and miscreants from @AITCofficialattacked a peaceful political procession being taken out by the@BJP4Bengalattended by Union MoS@DebasreeBJP, State Prez@DilipGhoshBJPand."

Absolutely horrific scenes in the heart of the City of Joy! Anguished to share that criminal elements and miscreants from @AITCofficial attacked a peaceful political procession being taken out by the @BJP4Bengal attended by Union MoS @DebasreeBJP, State Prez @DilipGhoshBJP and I. pic.twitter.com/ahkemXa5Ya

After the stone-pelting took place, a mob from the BJP rally chased the attackers and reportedly vandalized multiple motorcycles and scooters parked there.

Several BJP workers were injured in the stone-pelting incident and they were rushed to a nearby hospital.

Following the incident, a heavy police force rushed to the scene to bring the situation under control.

State minister Arup Biswas and local MLA Sobhandeb Chattopadhyay later visited the scene and accused the BJP supporters to be behind the clash.

"BJP supporters attending the rally had started provocation as they first pelted stones aiming at our workers. Our members were putting up TMC's flags there. Hundreds of BJP supporters from the rally suddenly entered the locality," Arup Biswas said.

Trinamool has already called for a counter-rally on the same route on Tuesday.

Meanwhile, after the rally ended, Suvendu Adhikari addressed BJP supporters at Rasbehari area where he dared Mamata Banerjee and said that he will defeat the Chief Minister in Nandigram by half-a-lakh votes, otherwise he will quit. politics.