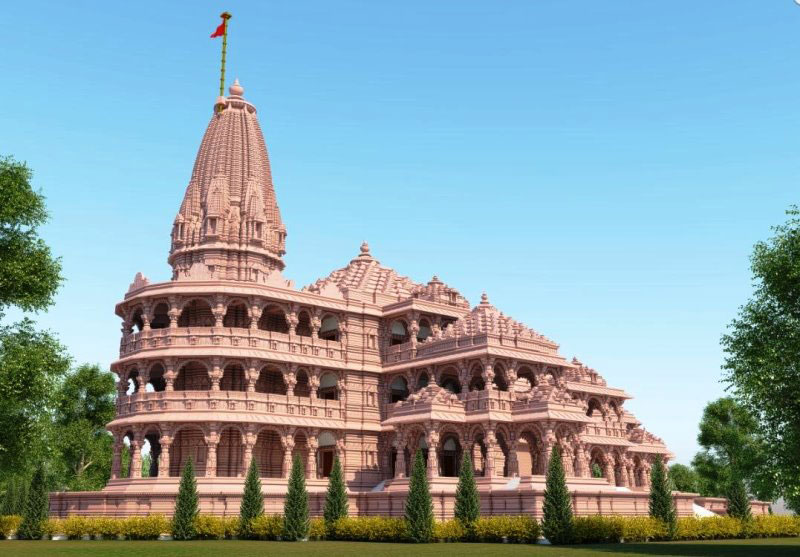 Century old Ayodhya dispute now a history: How the saga unfolded since 1857

Ayodhya: The century old Ayodhya land dispute would be put on a back burner and will be a history from August 5 when Prime Minister Narendra Modi lays the foundation stone of the grand Ram temple here.

Ram temple movement proves that how an issue of civil dispute over a piece of land gradually became one of the most defining aspects of politics in contemporary India.

But everything has been put to rest after the Supreme Court ruling on November 9, 2019 that the disputed land at Ayodhya be given to the Ram Janmabhoomi Nyas, drawing curtains on a 70-year legal battle in independent India and 90 years during the British rule. 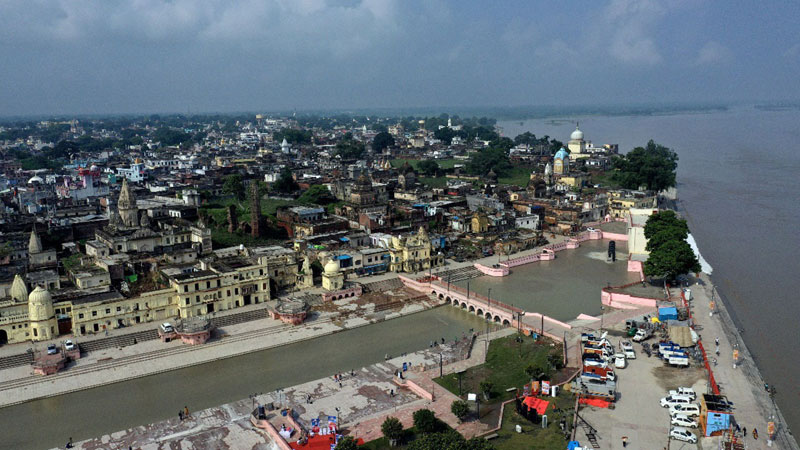 One of the longest-drawn legal battles in the nation’s history, the Ayodhya issue has created political turmoil in the country starting from mid 1980s after the Rajiv Gandhi government ordered to unlock the Ram Janmabhoomi site.

Babri Masjid was built by Mir Baqi, commander of Mughal emperor Babur in 1528 but the controversy kicked off 150 years later during the British regime  in 1857, the year of India’s first struggle of Independence against the British Raj. 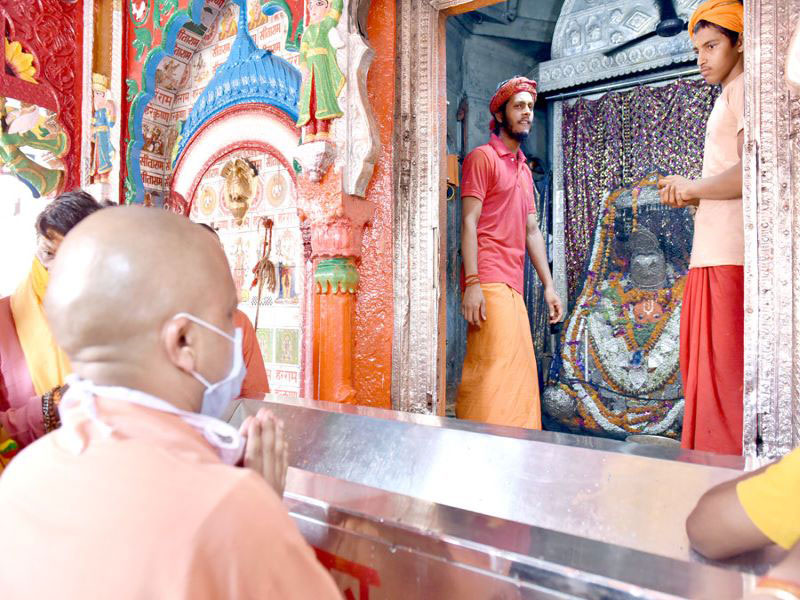 Ayodhya gears up for mega Bhoomi Poojan ceremony
Following is the chronology of the Ayodhya dispute:

1857: It was the year of India’s first struggle for independence against the British Raj. However, the seeds of another controversy were sown quietly some 130 km from Lucknow in Faizabad district. The temple town of Ayodhya fell under this district. A petition was submitted before the magistrate of Faizabad by Maulvi Muhammad Asghar, the muezzin of Babri Masjid, alleging that the eastern part of the courtyard of the mosque had been forcibly taken over by the Mahant of Hanuman Garhi.

Hanuman Garhi was an important centre of religious life in Ayodhya, especially for Vaishnav Bairagis. The complaint by the muezzin marked the beginning of a legal dispute over the place. However, it was still several years before the land on which the mosque stood was to be officially declared as “disputed land.” 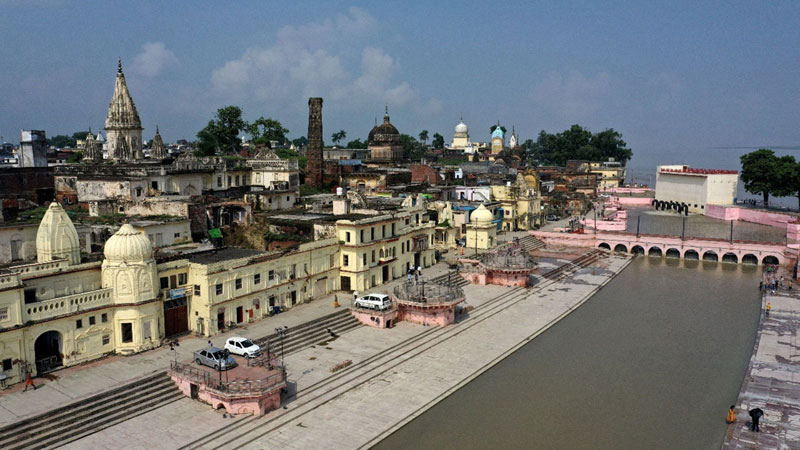 1859: The British government made its first intervention in the matter, while hearing the petition filed in 1857 and keeping in mind the regional conflict. The administration got a wall built that separated the places of worship for Muslims and Hindus. The Hindus got entry to the courtyard through the east gate, while the Muslims had access to the mosque from the northern side.

1860-1884: During this period, the Muslim side filed similar petitions like it did in 1857 and complained about the increasing interference of some local seers and sadhus and illegal occupation of land. These petitions were made in 1860, 1877, 1883 and 1884. All of them were rejected. 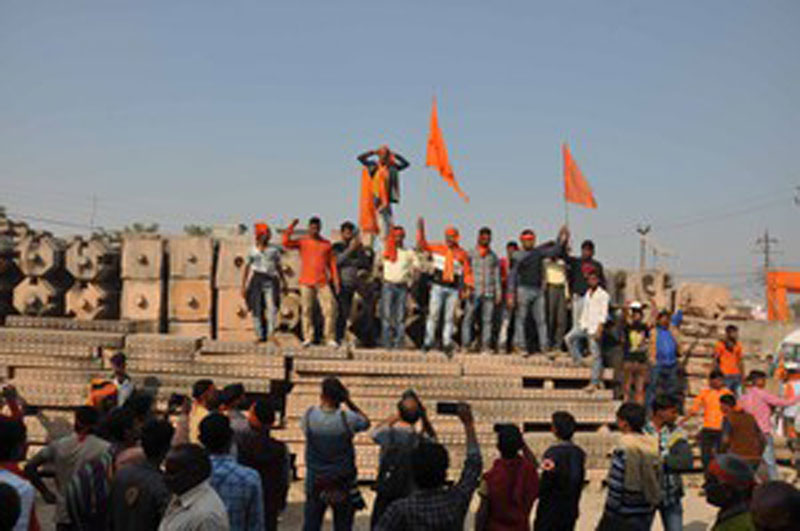 1885: The first legal representation was made by someone from the Hindu side. Mahant Raghubar Das filed a suit to gain legal title to the land and for permission to construct a temple on the ‘chabutara’ (raised platform) in the eastern courtyard. The petitioner claimed himself to be the mahant of the ‘janmasthan’ (birthplace) of Lord Ram and said the ‘chabutara’ was the Lord’s birthplace.

Hence, according to this first representation, the 'chabutara' and not the land where the actual mosque stood, was claimed to be Ram’s birthplace.

1886: The suit filed by Das was dismissed. However, rulers of the day had started seeing it as a Hindu-Muslim controversy of significant proportion.

1870-1923: As the dispute spread further, several official publications of the time started taking note of it. It was even mentioned in some of the gazettes published at the time. A stone marker reading “No 1 Ram Janmahoomi” was placed at the main entrance of the mosque. December 22-23, 1949: On the intervening night of December 22-23, idols of Ram and Lakshman were placed inside Babri Masjid. A crowd built up and started performing 'kirtan' (religious songs) inside the mosque.

December 29, 1949: A judge of Faizabad district court declared Babri Masjid a “disputed property” and ordered that status quo be maintained. Muslims were barred from entering the mosque and its main gate was locked. Hindus got permission for darshan from a side gate and four pujaris were employed with access to idols.

January 16, 1950: A member of the Hindu Mahasabha, Gopal Singh Visharad, filed a civil suit, seeking permission for worship without obstruction and permanent ban on removal of idols.

1959: The Nirmohi Akhara filed a suit claiming that the entire structure be transferred to it as it was a temple and not a mosque.

December 18, 1961: The Sunni Central Waqf Board filed a suit demanding that Babri Masjid be handed over to it. 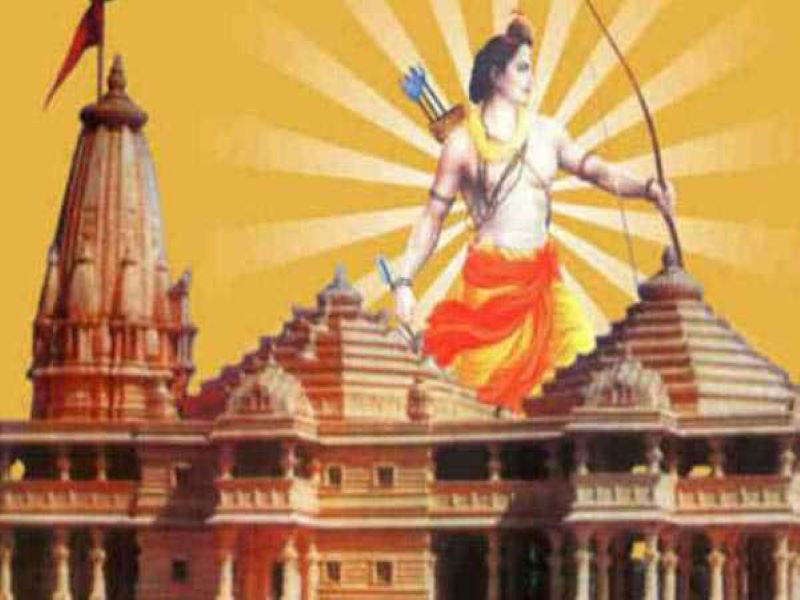 February, 1986: Locks of Babri Masjid opened by orders of the district judge of Faizabad.

1987: Suits withdrawn from Faizabad and transferred to the Lucknow bench of Allahabad High Court. The suit filed by Visharad became the number one suit. Another suit (number two) was filed by Paramhans Ramchandra Das (withdrawn later). The third suit was the one filed by Nirmohi Akhara and the fourth one was by the waqf board.


1989: ‘Ram Lalla’ himself became a party. The fifth suit was filed by one Deoki Nandan Agarwal in the name of ‘Ram Lalla Virajman.’ Agarwal filed it as a ‘sakha’ (friend) of Ram Lalla.

December 6, 1992: Babri Masjid demolished by thousands of Hindu ‘kar sevaks’ (volunteers) even as helpless security forces watched the structure being brought down. Two FIRs were filed the same day. One of them (crime number 197) was lodged at 1750 hours  against the “lakhs of karsevaks” for the offence of demolition.

December 16, 1992: The Centre formed the one-man commission of Justice Manmohan Singh Librahan to look into the sequence of events leading to the demolition and all the facts and circumstances relating to the events that transpired in the Ram Janmabhoomi-Babri Masjid Complex on December 6.

January 7, 1993: The President of India, through an ordinance, issued orders for acquisition of certain areas around the disputed site. It was later re-enacted as an act of Parliament. On the same day of issuing the ordinance, the President also referred it to the Supreme Court for its advisory opinion.

1993-2002: Hearing gained pace in the title suit case in the Lucknow bench of the Allahabad High Court. A long-drawn battle began as parties concerned started presenting their arguments. 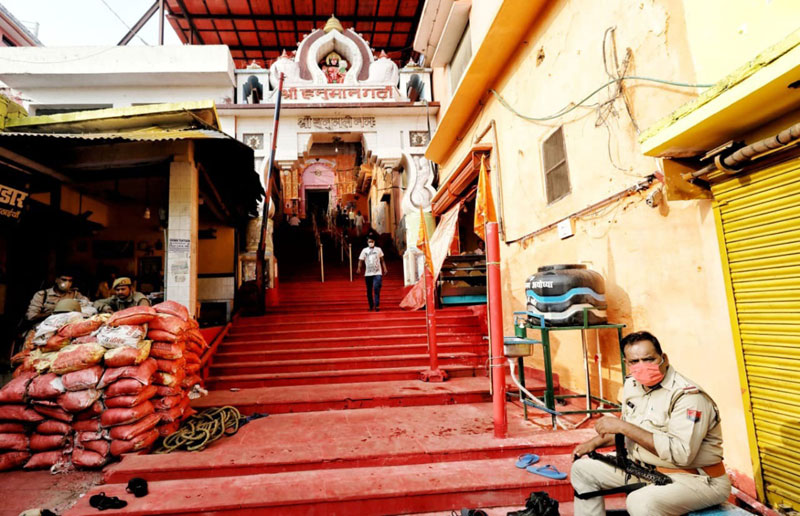 August 1, 2002: Focus shifted back to the title suit as the high court ordered the Archaeological Survey of India (ASI) to initiate excavation at the disputed site.

Dec 2002-August 2003: ASI began excavation at the disputed site on December 30, 2002. It did a preliminary survey and submitted its report to the ASI director general. It suggested a variety of anomalies ranging from 0.5m to 5m in depth that could be associated with some ancient and contemporary structures. On the basis of the preliminary findings, a detailed digging and examination was started. The ASI submitted its report in two volumes before the court in August 2003.

September 30, 2010: The three-judge bench delivered the much-awaited judgment. The court divided the disputed land equally between the three major parties concerned, i.e., the Sunni Waqf Board, Nirmohi Akhara and Ram Lalla Virajman. However, none of the parties was satisfied with the verdict. 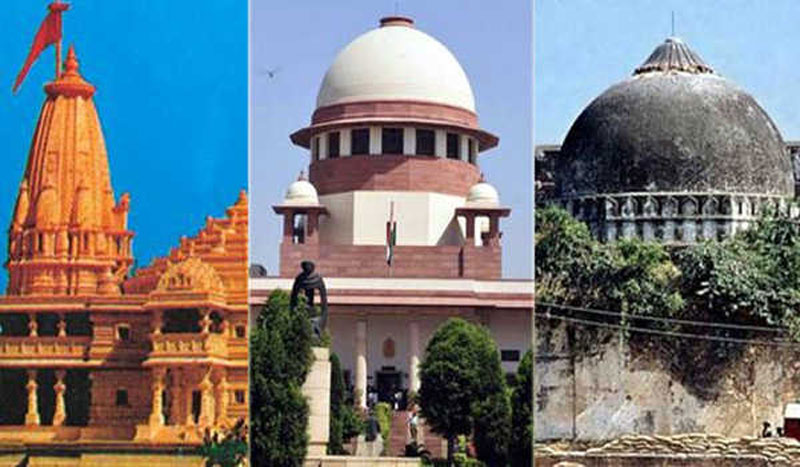 2011-2016: It’s a period of comparative quiet even as voices in the political arena continued to rise for a judgement in the case pending before the SC.

2017-2019: First, under Chief Justice Deepak Misra and then, under CJI Ranjan Gogoi, the apex court shifted focus towards the title dispute case. Justice Misra retired in 2018 before regular hearing in the case could begin.

2018: After assuming office in October 2018, CJI Ranjan Gogoi expressed his willingness for a speedy hearing and judgment in the long-pending case. 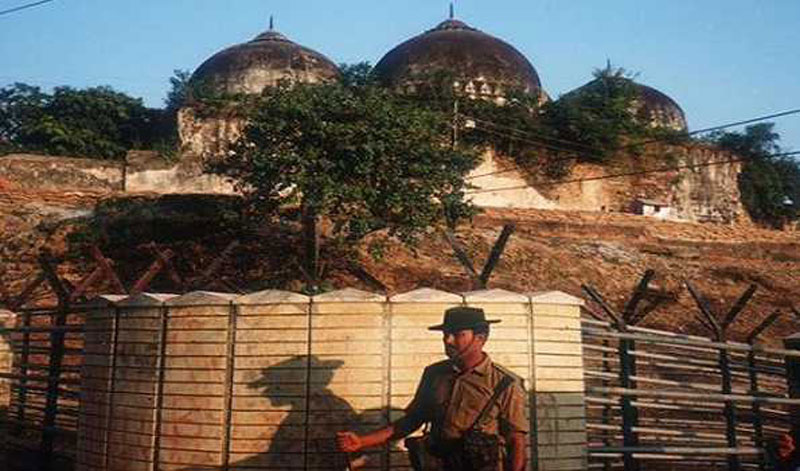 January, 2019: The CJI constituted a five-judge bench, including himself, to begin hearing in the case.

August 2019: On August 2, the mediation committee informed the Ayodhya bench that the parties concerned had failed to reach an agreement. The Supreme Court then fixed August 6 for commencement of day-to-day hearing in the matter. 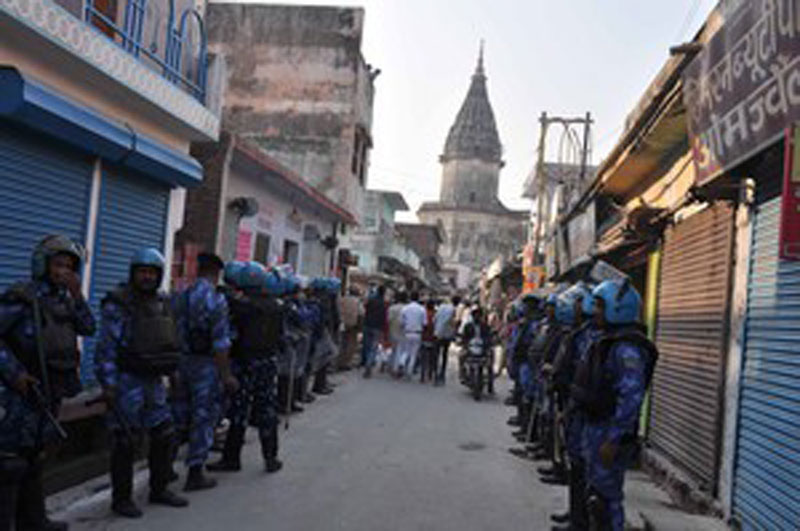 October 16, 2019: Starting August, the bench regularly took up daily hearings of the case for 40 days. October 16 was fixed as the last date for the parties to submit their argument. The legal battle that had continued in courts of independent India for almost 70 years reached culmination with hearing being completed in the country’s top-most court.

November 9, 2019: Five-judge bench headed by Chief Justice Ranjan Gogoi and comprising Justice DY Chandrachud, SA Bobde, S Abdul Nazir and Ashok Bhushan deliver the much awaited judgement in the case. It was a unanimous decision. The bench ordered for allocation of the entire disputed land of 2.77 acres for the construction of a temple. The union government was to constitute a trust to oversee it.
Related Images