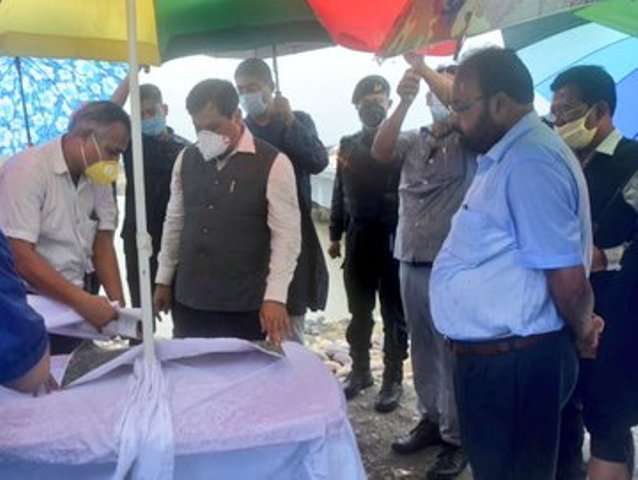 It may be noted that following incessant rain in the past few days the overflowing Jiadhal river has inundated at least 50 revenue village.

He also visited the under-construction embankment site along the Kumotia river and took stock of the construction of the embankment.

Sonowal directed the implementing agency to expeditiously to complete the construction process.

The erosion perpetrated by Charikaria river on the back side of Dhakuakhana College has posed a great deal of problem, as the Assam Chief Minister visited the area, took stock of the situation and conceded that the government would take immediate steps to address the problem.

Talking to the reporters, Sonowal said that along with flood, soil erosion has posed a great deal of challenge. He also said that he has been visiting several places of the state to take stock of the problems posed by flood and erosion.

Inspected an embankment on the Kumotiya river in Dhemaji district and reviewed progress of construction works.

“I am already directed Water Resources Department to initiate remedial steps to give the people succour from the perennial problem of flood and erosion. The erosion perpetrated by different rivers in Dhemaji have posed a great problem as local MLA and MP took the issue very seriously and the Water Resources Department has pressed its men and materials to find a long standing and scientific solution to the problem,” Sonowal said.