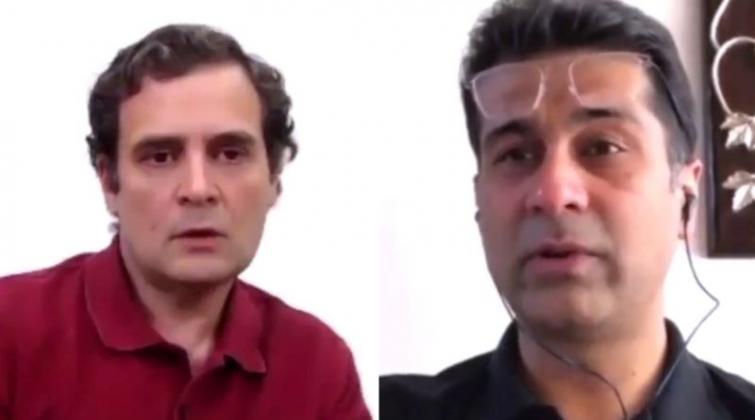 In a video conference with Gandhi, Bajaj, the managing director of Bajaj Auto, compared India's lockdown, which was announced by Prime Minister Narendra Modi on Mar 24 midnight, with the shutdown in other countries and said people were not boxed up in their houses on foreign soils in a bid to stem the spread of the contagion.

When the Congress leader said he had never imagined the entire world would be locked down which didn't happen even during the World Wars, Bajaj stated, ".. India has been locked down which I refer to as the draconian lockdown. I am not hearing of this kind of lockdown from anywhere else.

All my friends and families living across the world have already been free to step out, to take a walk, to go and buy something they require. So in terms of the social and emotional aspects of this lockdown, they seem to have been in a much better place." (sic)

After Gandhi mentioned the migrant workers' crisis caused due to the lockdown, which is still in place but in containment zones, Bajaj resonating his words during a recent interview with Mojo said the western world was not the right "benchmark" while dealing with Covid-19.

"I think right from the beginning and this is my view, whether it was in terms of how this problem is to be perceived, I don't understand why despite being an Asian country we sought not to look at what was happening (in the) East, but we looked at Italy, France, Spain, UK and subsequently the US which are not the right benchmarks in any sense whether it's the inherent immunity, temperature, demography," said Bajaj.

"We should never have been looking there (West) even in terms of how to approach this from the medical point of view," he added.

Modi on Mar 24 midnight announced the lockdown which was later extended four times with several relaxations in the later ones.

India on Jun 1 entered into lockdown 5.0 or Unlock 1.0 which enforced restrictions only in containment zones (where Covid cases are reported) while shopping malls, restaurants, religious places will be opened in the rest of the areas from 8th of the same month.

Despite the lockdown of more than two months, India's Covid cases are spiking as the country of 1.3 billion people registered the biggest spike in Coronavirus cases on Thursday.

Even before the Coronavirus outbreak, India's economy was struggling with its GDP falling in each quarter to settle at somewhere below 5 per cent, earning criticisms for the country's most popular leader Modi and his Bharatiya Janata Party (BJP) government.

With the lockdown coming in full effect since Mar 24, the growth rate is expected to take nosedive further.