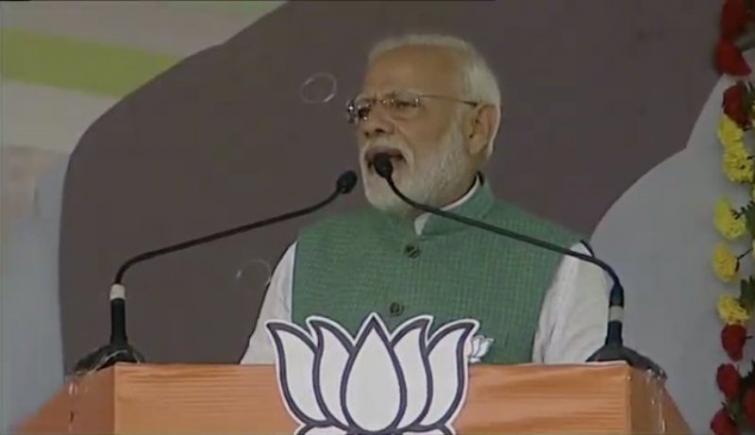 People who are setting fire can be identified by the colour of clothes they are wearing: PMÂ

Dumka/UNI: Launching an all-out attack on the Congress party and its allies for the recent incidents of arson which took place in different parts of the country, Prime Minister Narendra Modi said that those people, who are setting fire, can be easily identified by the colour of the clothes which they are wearing.

Addressing an election rally at the Dumka Airport Grounds here, he said Congress and its allies were creating an uproar over the issue and when they are not being listened they indulge in arsoning.
He said that the Congress and its allies should understand that their acts are giving silent support to those who are indulging in arsoning and was turning a blind eye on them.

"The entire country is watching and now believes that by bringing the Citizenship Amendment Bill Modi has saved the country," he said that the acts of the opposition were a proof that a right decision has been taken.

He appreciated the people of Assam and North East who have parted ways from those who are indulging in violence and are raising their voices in a peaceful manner which is ideal in a democracy.

Condemning the Congress which has decided to hold demonstrations outside Indian Embassies across the world to highlight the problem of unemployment, slump in economy and farmers distress he said that the Congress Party is acting similar to the line of Pakistan.

He said, when the decision on Ram Mandir came up Pakistan protest outside the Indian Embassy in United Kingdom, when article 370 was abolished they did the same and indulged in violence, Modi said adding that these acts were held in London with the money which was supplied from Pakistan and people of the neighbouring country who live in London.

"However this is for the first time Congress is doing what Pakistan has been doing earlier which is very shameful," he said adding that by protesting outside its own Embassy, Congress was rather making an attempt to bring a bad name for the nation in the world.

Modi said that the acts of the Congress party has once again proved that the Parliament decision on the citizenship Amendment Bill was 1,000 per cent correct decision.