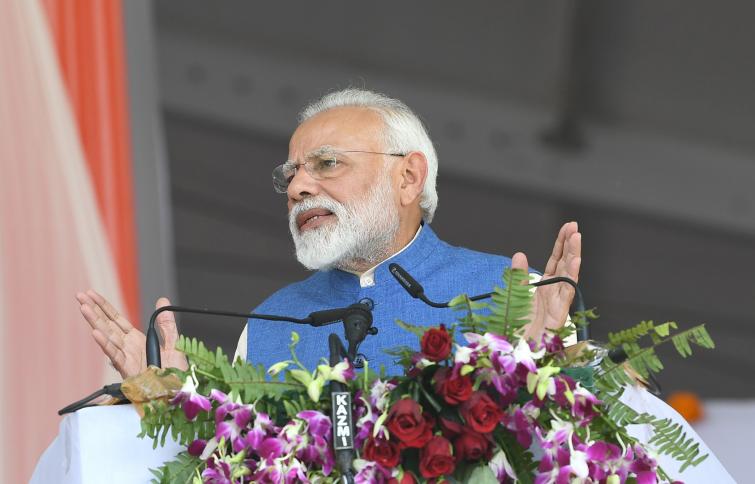 Martyrdom in Pulwama attack inspired us to uproot base of terrorism: Modi

New Delhi, Feb 24 (IBNS): Prime Minister Narendra Modi on Sunday while addressing the 53rd episode of Mann Ki Baat said the martyrdom in the Pulwama terror attack has inspired all 'relentlessly to uproot the very base of terrorism.'

During his address, Modi said: "As a consequence of the Pulwama terror attack and the sacrifice of the brave jawans, people across the country are agonized and enraged. All around, there is a deluge of strong feelings of sympathy for the martyrs & their family members."

He said the outrage that "singes your being and mine" on account of the terrorizing violence replicates itself in the collective inner psyche’ of every citizen of the country.

"It also echoes in pro-humanity communities of the world, which sincerely believe in humanity. I respectfully bow to all the brave sons of the country, who laid down their lives, protecting the honour of their motherland, India," said he.

"This martyrdom will keep inspiring us relentlessly to uproot the very base of terrorism; it will fortify our resolve. We shall have to take up this challenge facing our country, forgetting all barriers of casteism, communalism, regionalism and other difference, so that, our steps against terror are firmer, stronger and more decisive," he said.

Praising the security personnel, Modi said: "Our armed forces have consistently displayed unparalleled courage and valour. On the one hand, they have displayed exemplary capabilities in restoring peace; on the other, they have retaliated in equal measure, in a language the attackers understand."

Giving a strong message of how his government took action in the wake of the Pulwama attack, Modi said: "You must have seen how within a hundred hours of the attack, retributive action was accomplished. The Army has resolved to wipe out terrorists and their harbourers."