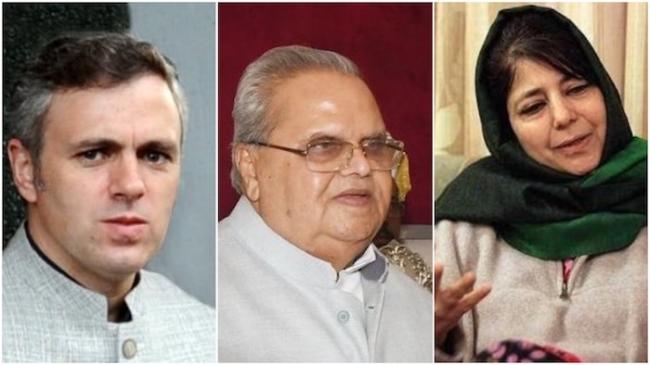 Srinagar, Nov 21 (IBNS): A day after Jammu and Kashmir Governor Satya Pal Malik  dissolved the state assembly amid claim to form government by the People's Democratic Party (PDP) in alliance with their arch rival National Conference, Omar Abdullah, the leader of the latter, hit out at the Governor over his allegations that money changed hands.

With Congress and National Conference agreeing to support PDP led by Mehbooba Mufti to form government amid a counter claim by the Jammu and Kashmir People's Conference party of Sajjad Lone in alliance with the BJP, the political scenario hotted up in the insurgency wracked state.

On Thursday Omar Abdullah held a press conference to attack the governor's charge of horse-trading and money changing hands to engineer defections.

"The second para of Governor's letter mentions about horse-trading and use of money to engineer defections. How can he bring such charges against three political parties. If he has some information, he should bring it before the people. People should know if there are attempts to buy MLAs," said Abdullah.

Mehbooba Mufti yesterday had claimed that her party has the support of her arch-rival in the state Omar Abdullah's National Conference and the Congress.

The state has been under Governor's Rule since June, when the BJP severed its ties with Mufti.

Omar Abdullah said it is his party National Conference which will suffer because of supporting the PDP. "Many told me we are giving a new life to PDP. But we still did it to take the state out of this bog," he said.

Abdullah also attack the BJP and its leader Ram Madhav for his purported tweet on parties acting at the behest of Pakistan.

Abdullah tweeted: "I dare you @rammadhavbjp ji to prove your allegation. You have RAW, NIA & IB at your command (CBI too is your parrot) so have the guts to place evidence in the public domain. Either prove this or be man enough to apologise. Don’t practice shoot & scoot politics."

No, misplaced attempts at humour won’t work. You HAVE claimed my party has been acting at the behest of Pakistan. I dare you to prove it! Place the evidence of your allegation of NC boycott of ULB polls at Pak behest in public domain. It’s an open challenge to you & your Govt. https://t.co/7cumKwKxuM

Earlier, talks of a grand alliance was doing the rounds in Kashmir with some PDP leader making statements.

National Conference patron and Srinagar member of Parliament, Farooq Abdullah on Saturday had said he was willing to sit down with the Congress and the Peoples Democratic Party (PDP) for government formation in the interest of the people of the state.

Even leader of opposition in Rajya Sabha and former J&K chief minister Ghulam Nabi Azad (Congress) speaking to reporters said that informal talks are on to explore the new government formation in Jammu and Kashmir.

“The parties (Congress, PDP, NC) felt they should come together and explore government formation in Jammu and Kashmir… we are just discussing a proposal, nothing else,” Azad said on the potential alliance.

The political developments unfolded one after another since yesterday in Jammu and Kashmir.

Mehbooba Mufti had tweeted her letter to the Governor where she claimed to have the support of 56 lawmakers, including 12 from the Congress and 15 from National Conference.

While Mufti is backed by the Congress and Omar Abdullah, a claim by Sajad Lone of Jammu and Kashmir People's Conference cited the support of the 25 BJP lawmakers.

In a series of tweets, the BJP meanwhile wrote: "The proposed alliance between the INC and the PDP broke up even before it was formed. They have taken contradictory positions on dissolution. One supports it and the other opposes it." one tweet read.

"The best option in such a scenario is to go in for a fresh election at the earliest. This assembly cannot produce a stable government," another tweet of the party read