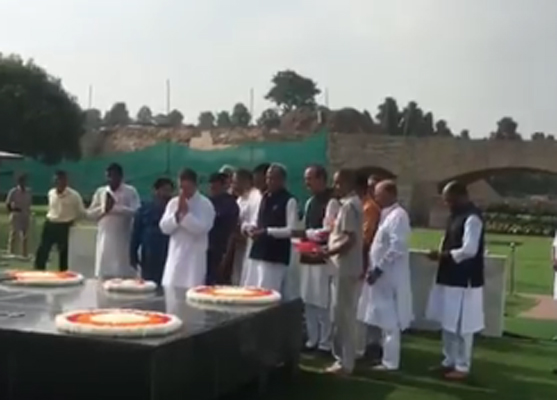 New Delhi, Sept 10 (IBNS):  Congress and 21 political parties are observing a nation-wide strike on Monday to protest against the growing prices of petrol and diesel in recent times.

Congress supremo Rahul Gandhi joined the protesters in Delhi and he was seen marching with opposition leaders from Rajghat towards Ramlila Maidan to protest against fuel price hike issue.

The strike is expected to hit normal life in many parts of the country.

Trinamool Congress-led West Bengal government has said rallies will be held in the state but there will not be any strike.

The TMC website had earlier said: "To protest against the rising fuel prices and other anti-people policies of the Centre, Trinamool Congress will organise a protest march on September 10. On the same day, other Opposition parties have called for Bharat Bandh. Although, Trinamool supports the issues, the party does not believe in bandh culture."

"Huge police bandobast at my residence. Workers are being picked up since early morning #BharatBandh," tweeted Nirupam.

Huge police bandobast at my residence. Workers are being picked up since early morning #BharatBandh

In Gujarat, bandh supporters reportedly burned tyres and even stopped buses in Bharuch.

Schools and other educational institutions remained closed in Bangalore after  JD(S) announced it will support the day-long strike.