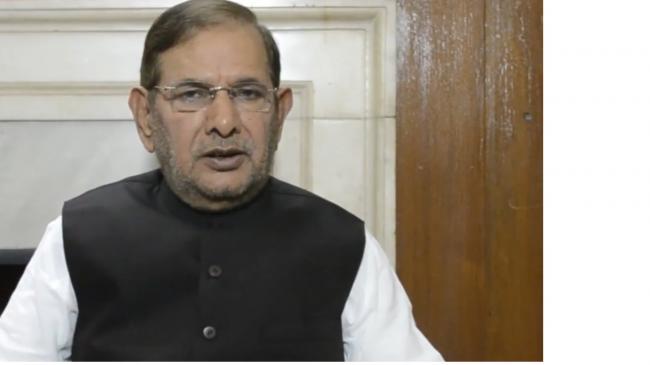 Will continue to fight to save democracy : Sharad Yadav tweets after disqualification from RS

New Delhi, Dec 5 (IBNS) : A day after he was disqualified as a member of the Rajya Sabha, JD(U) rebel leader Sharad Yadav said on Tuesday that he will continue to fight to save democracy.

"I am disqualified from Rajya Sabha as Mahagathbandan which was formed to defeat NDA in Bihar & after 18 months to break it & joining NDA to remain in power & if to speak against this undemocratic style is my fault I will continue to fight to save democracy," Yadav tweeted.

“The petition was filed on September 2 and the decision is out on December 4. The speed is mind-boggling. Similar cases are pending in Lok Sabha for over a year. So political affiliation is the only thing that matters?” . Yechury asked in a series of tweets.

"Like Ceasar's wife, the Rajya Sabha Chairman's decisions must be above questioning. But  the disqualification of Rajya Sabha MPs Sharad Yadav and Ali Anwer casts a shadow," he said.

Vice-president M Venkaiah Naidu, who is also the Rajya Sabha chairman, on Monday disqualified Yadav and Anwar as members of the upper house of Parliament,

The action comes in the wake of the petition filed by Bihar Chief Minister Nitish KumKear-led JDU faction seeking disqualification of the two rebel leaders.

Both of them fell out with Nitish Kumar after the latter broke away from the grand alliance with the Rashtriya Janata Dal and the Congress to re-align with the Bharatiya Janata Party earlier this year.