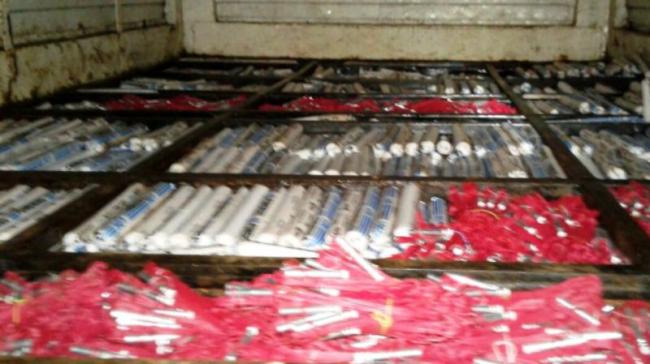 According to reports, acting on a tip-off, a joint team of Birbhum district police and Central Reserve Police Force (CRPF) intercepted a mini truck on Nalhati-Bahadurpur Road at Khapur village under Nalhati Police Station limits, kilometres away from Jharkhand border, and recovered those detonators.

The driver and the helper of the mini truck were arrested for carrying those explosive materials.

"We seized a Tata-407 truck at Nalhati Police Station area and recovered as many as 1,80,000 electrical detonators from the vehicle," a senior official of Birbhum district police told IBNS.

"Two residents of Telangana, Kranti Kumar and Srikant, were arrested for carrying those detonators," the official added.

The duo was produced in a local court on Wednesday and was sent to four-day police custody for further interrogation.

"We are currently quizzing them to know if they have links with any terrorist group or Maoists," the police official further said.