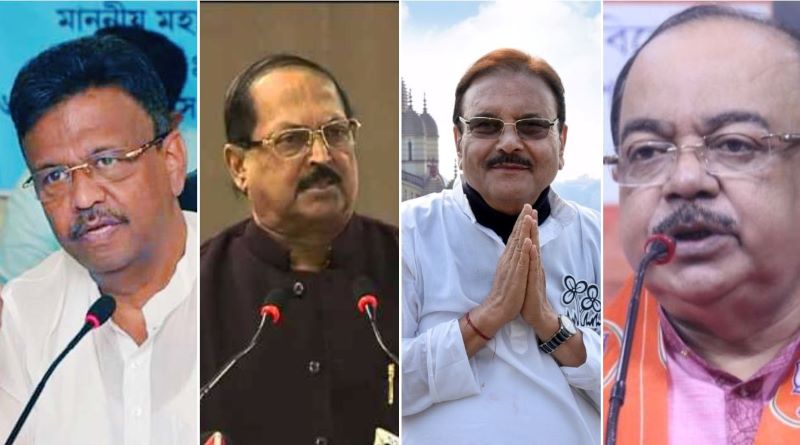 The Calcutta High Court is on Wednesday hearing four arrested West Bengal politicians' plea seeking a review of the stay order put on their bail granted by a lower court. West Bengal Ministers Firhad Hakim, Subrata Mukherjee, MLA Madan Mitra, all belonging to the ruling Trinamool Congress (TMC), and former Kolkata Mayor Sovan Chatterjee were arrested by the Central Bureau of Investigation (CBI) in connection with the Narada sting operation on Monday morning. Though a special CBI court granted bail to all four, in a dramatic turnaround, the high court put a stay on the bail on Monday night.

Next hearing will be held on Thursday.

Hearing is scheduled to start from 2 pm.

No interim order on the stay on bail. Four to remain in judicial custody for another day.

They are all influential: Tushar Mehta

They all are influential, it was proven when a Chief Minister rushed to CBI office and sat on dharna, and Law minister rushed to court. It happened to obstruct a fair trial. Such things would happen again when someone else will be arrested in future: Tushar Mehta

The stay on bail put by Calcutta High Court is unprecedented, never happened in last 75 years, needs a rectification: Singhvi

People staged a democratic protest and there was no instigation/influece/incitement from CM or any other leader. Everything happened there that day was self-motivated: Singhvi

Do you think pelting stones is the proper democratic way to show/stage protest: Court asks Singhvi

CBI should have sought permission from Assembly Speaker: Singhvi

CBI should have sought permission from Assembly Speaker, taking the permission from Governor is illegal, he can't sanction it. CBI special court did not say  that it pronounce judgement amid pressure. People staged demonstrations outside the CBI office to protest and staging protest is a fundamental right of people: Singhvi

CBI distracted the High Court with incomplete facts to put a stay on the four politicans' bails granted earlier by lower court as CBI wants to keep them behind the bars at any cost: Singhvi.

Mob threw stones at CBI office. Kalyan Banerjee shouted in court. Even CBI officials couldn't produce case diary before court due to the violent situation. What happened that day was to affect the judiciary and officials. CBI was threatened  that their investigation was effected. Law Minister was at lower court with his supporters during the virtual hearing and that influenced the judgement: Tushar Mehta.

CBI is trying all way to keep them behind the bars. CM, others and TMC supporters/workers rushed there as sympathizers, not to influence: Singhvi

CM, without any permission, along with her people entered the CBI office, sat on dharna, and asked to arrest her which was unprecedented: Tushar Mehta

CBI had initiated the case in 2017. Why they made the arrests suddenly after five years. This won't be right to move the case to any other state from Kolkata/West Bengal: Singvi

Such incident never happened in last 75 years, CBI is attempting to increase the judicial custody term of the four by one after another day: Singhvi

To hear the recall petition, it must be kept in mind what happened that day which was extra ordinary: Tushar Mehta

A M Singhvi: In the Covid situation, 75-year-old politician Subrata Mukherjee, who is an MLA for last 45 years, can not be kept in jail.

Never happened in past: Mehta said while explaining the Nizam palace incident.

Was it necessary to keep them behind the bars in the pandemic situation?: Justice Arijit Banerjee. They are not in jail, they all are in hospital: Mehta.

Justice Arijit Banerjee: Why would we take decision about the bail of these four? We had stayed the bail as there were allegations of pressures from people.

The step of CBI is contrary to justice: Singhvi

A M Singhvi: The incident of stay on bail was unprecedented. Accused's supporters didn't move the court. CBI did not serve any notice before arrest.

SJ Tushar Mehta: The accused should be in jail (JC). Accused's recall petition isn't reasonable. The arrests were necessary for further investigation. The case should be transferred from West Bengal/Kolkata.

Court questions: Were the accused interrogated earlier? Did the accused not cooperate with the investigators? Was it necessary to arrest them amid pandemic?