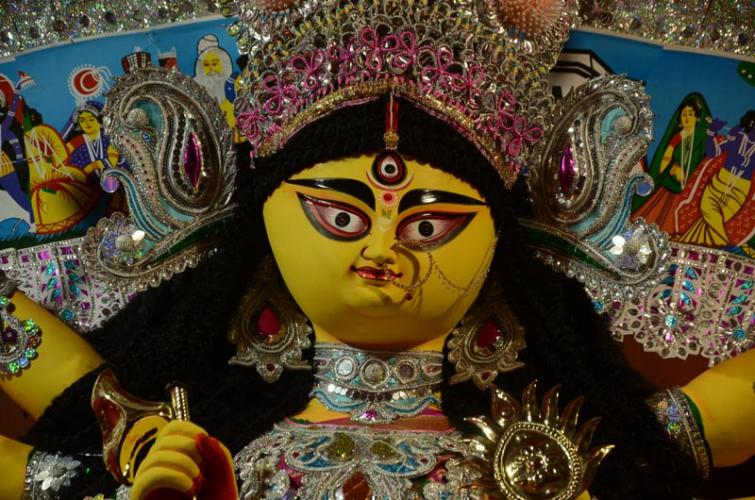 Kolkata, Oct 6 (IBNS): The festive spirit in Kolkata reached its peak on Sunday as the Maha Ashtami celebrations of the Durga Puja commenced amidst cloudy sky.

The day began amid the pious 'pushpanjali' (prayers with flowers), where thousands of devotees offered their prayers to the Goddess in empty stomach at various marquees (puja pandal) across the state.

Devotees clad in traditional attires assembled at the 'pandals' to offer their 'pushpanjali' to the goddess.

According to old beliefs, all prayers are answered by the Goddess on this day.

The ritual of 'pushpanjali' was followed by an aarti with five-lamps, incense sticks, flowers and other puja items.

The pushpanjali this year was soon followed by the 'Sandhi' puja.

But it is not only the 'pushpanjali' that make Maha Ashtami all the more special; rather it is the custom of 'Kumari Puja' which is the real point of attraction on this day.

During the 'Kumari Puja', pre-pubescent girls are worshipped as incarnation of Goddess Durga.

It is considered that the ritual is performed to appease the Goddess who controls shristi, shthiti and vinash (creation, stability and destruction) of the universe.

Meanwhile, different parts of the city are witnessing traffic clots and are posing a threat to the pandal hopping.