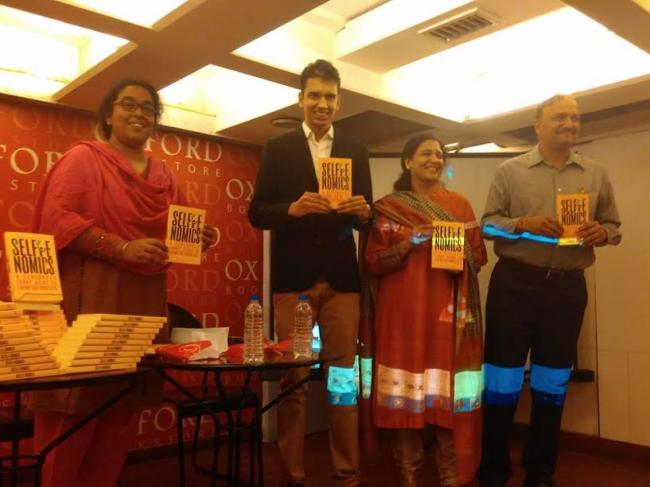 Selfienomics: A book that makes the self-help genre stand on its head

India Blooms News Service | | 16 Dec 2016, 04:47 pm
# Selfienomics, #Revant, #self-helpbooks, #RevantHimatsingka, #IndianauthorswritinginEnglish, #Bloomsbury
Kolkata, Dec 16 (IBNS): Revant Himatsingka said that he does not see his debut book, Selfienomics, competing with the popular self-help books in the market. Instead he expects to compete with Scoopwhoop or Buzzfeed or Facebook to grab eyeballs, said the author during the launch of his book in Kolkata recently.

The book launch, held at the Oxford Bookstore, was preceded by a question-answer style conversation between Revant (who always prefers to go without his surname as a former classmate revealed) and Yajnaseni Chakroborty, former journalist and Chief Coordinator of Kolkata Literary Meet (KLM).

To his surprise, Revant Himatsingka discovered that many publishers in New York believe when Indians write self-help books for global readers, it must be based on yoga and spirituality.

So he changed tack and decided to write for an Indian readership.

"It was a good idea after all because we Indians love to desi-fy eveything, said Revant, "We love to eat pizza with bhujia sprinkled on top."

The book, written in a tongue-in-cheek style, peppered with hashtags and other appendages from the digital media, is far removed from the serious world of self-help books that readers have been used to so far, a style that Revant said he chose consciously.

According to Revant, most self-help books say stay positive, do not give up, never be negative -- serious stuff which most young readers find boring.

Revant wants his readers to reflect on one's life and ask questions in their effort to improve themselves.

It is a book about looking at life in an unconventional way.

The focus of the book is not "what to think" but on "how to think".

"I want them to ask questions which they have never asked before," said Revant, "Like, how many animals are gay."

Revant, who pursued higher studies in New York University Stern School of Business, said that while writing the book, "I did not wait for motivation to find me but I made a pro-active search to find motivation." The 22-year old said, "I changed my email password to #Iamanauthor. Every time I typed my password, it motivated me to complete my book. This particularly helped when I accidentally deleted two chapters. I had taken one month to write those chapters. I got frustrated. I thought of giving up writing the book. But the simple act of typing #Iamanauthor made me push ahead."

Through his book Selfienomics, published by Bloomsbury, Revant aspires to create a knowledge revolution in India by improving and organising people's thought processes.

Talking about the title of the book, Revant said that many think it is about economics but far from it.

"A selfie is taking a photo of yourself rather than having someone else take it for you. You try out various filters and select the one that makes you look your best. Selfienomics is a version of a selfie: reflecting on different aspects of your life and taking the initiative to improve so that you can be the best version of yourself."