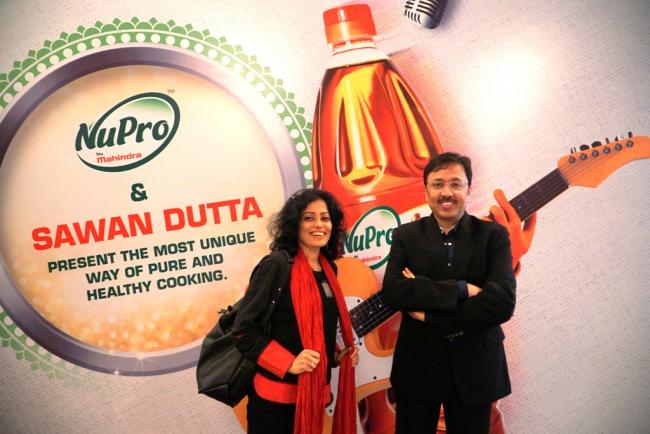 India Blooms News Service | | 14 Oct 2016, 10:10 pm
#Mahindra NuPro, #Sawan Dutta, #vlogging, #food vlogs
Sawan Dutta, whose last two videos on shukto and jhalmuri were released during the Pujas, talks about her association with Mahindra Agri Solutions, her video blogs and her love for all things Bengali in a candid conversation with IBNS correspondent Tanushree Sen.

How did the association with Mahindra happen?

Well, I realised that The Metronome was growing bigger more rapidly than I’d expected, and that I was spending more and more of my time, energy and professional skills on the song blog. So I figured I’d need to find a way to sustain it, over time. Since the music and the videos themselves are available for free for my viewers, the only way to sustain The Metronome was to look for brand partnerships, for associations that would be mutually beneficial for both the brand and my blog.

This has been a long and complicated process.

There were brands which I thought resonated perfectly with my content and I approached them. But many were yet to grasp the concept of digital marketing and therefore confirm their participation. Then there were brands that approached me with a lot of money, which I had to turn away because their requirements would have compromised the integrity of my blog.

Finally, Mahindra happened. Not just because Mahindra is a brand any mountain lover and off roader like me is familiar with but also because they’re giving me complete creative freedom to do things my way, and to use their products in any manner I want, in keeping with my blog content. Also, their NuPro mustard oil which I’ve been using is a wonderful product that I’d recommend to my family, friends and just about anyone!

What has been the experience like so far till now with Mahindra Agri Solutions?

It continues to educate me about new things constantly, through real time interactions with an audience that continues to astound me with its warmth, open mindedness, candour and support. It’s also busted many myths that I used to harbour, about it being impossible to reach a wide enough audience or grow one’s channel organically without spending money or deploying any PR or marketing efforts - none of which I’ve ever done, to date, for The Metronome.

With Mahindra - our association’s just started - and so far it’s been a dream run - let’s see how we can take things forward and explore more exciting avenues in the future.

What was the thought process that went behind the idea to start vlogging, and consequently, why the need to focus on bong food?

Vlogging was meant to be my way of having fun, doing my own wild crazy experimental things with music, beyond what I’ve been doing as a professional musician for films/ TV/ ads and other commercial clients. It was supposed to be like a personal journey, documented through music and visuals. There was no specific plan or direction as such when I started, beyond having fun.

Ode to Boroline, my second post, was meant to be a wacky crazy one off thing. But the completely unexpected reaction to it, along with my audience’s massive demands for the return of the Bong Lady, got me thinking about what else the lady could do.

And since cooking is something I enjoy, and food and recipes is a pretty popular genre on YouTube, I decided to try creating a new hybrid genre that didn’t exist, by combining food and music. The very fact that no one’s done it before made me want to try it out. Bong food was logical, because it gave the bong lady something to do, I guess.

Share some of the reactions you received or feedback experiences from around the globe?

Just today, my sister in London told me that now she’s getting introduced around to people in her Camden Square Pujo as the Maachher Jhol/ Kosha Mangsho lady’s ‘chhoto bon’.

Then I keep getting kids from across the world sending me clips of them singing one of my songs! There was the four year old girl from Toronto, and a 13-year old girl and her little brother from Austin, Texas, singing ‘Ode to Boroline’.

Then a theatre company from Birmingham approached me, asking for my permission to perform Kosha Mangsho live for one of their gigs. And then there was this German blogger who made a variation of my’ Kosha Mangsho’ using ingredients local to his neighbourhood, and shared it on his blog.

Bengalis from across the globe have been writing in to me thanking me for making them nostalgic/ for teaching their kids about Bengali culture/ accents/ food and recipes, in a manner they can easily relate to and enjoy, and for helping them share some of these Bengali recipes with their non Bengali, non Indian friends, through my songs.

What are you future plans in terms of these vlogs?

I never make plans. That’s what I think has kept the vlog alive and spontaneous so far. I make my plans on the go, depending on where I am, what’s happening inside my head and in my life and in the world around me. Beyond that, of course, I hope to try and make this association with Mahindra a memorable one for both of us. And I hope, if and when other brands come on board, I’ll always have the wisdom to make the right choices for the right reasons, and never let my viewers, the brand or myself down in any way.

What were the challenges that you've faced during the entire course of this venture?

I think the biggest challenge so far is the fact that I am basically a one-woman army. I do everything myself, every step of the process is undertaken by me. So that can be very stressful and hectic. Often people ask me, "Why is the camera angle so intimate", and they fail to understand that it's because I am holding the camera myself and I am trying to figure out the correct position and angle.

Not often, and definitely not on a regular basis. But I do like cooking once in a while, it’s a great stress buster - and when I do cook, I like to do it well. I don’t know what I’d do without other online recipes, food blogs and YouTube recipe videos, I depend on them quite a lot - though I don’t follow anything specific - I mostly mix and match recipes depending on what looks convenient.

What are some of your favourite Kolkata memories?

My childhood summer holidays spent with my grandparents in North Cal, the load sheddings, the lanterns, the narrow alleys of the North Cal neighbourhoods with their fascinating display of life in its myriad hues. The multiple course meals, starting with bitter neem begun or bhaate, followed by dal and chorchori and a variety of bhajas, the fish fries, the maachher jhols and jhaals and chutneys and the mishti doi and all the mind-blowing sweets! The trams and rickshaw rides and walks with my jethu to the maachher bajaar, taking the ferry across the Hooghly, devouring hojmi guli by the hundreds. It is all very vivid to me still.

And lastly, how did the switch from architecture to music happen?

I think more than anything or anyone else, my husband, CB is responsible for that. By introducing me to DAWs ( digital audio workstations ) and MIDI. He converted me from being a mere band member used to doing just one or two things in a band, to a complete musician in control of every aspect of my music - and once that happened, taking music up as a profession was just a matter of time. For a while I tried to continue working as an architect while doing music, but both professions require so much of one’s dedication and time that it just isn’t possible to do justice to either that way. So I switched, eventually.