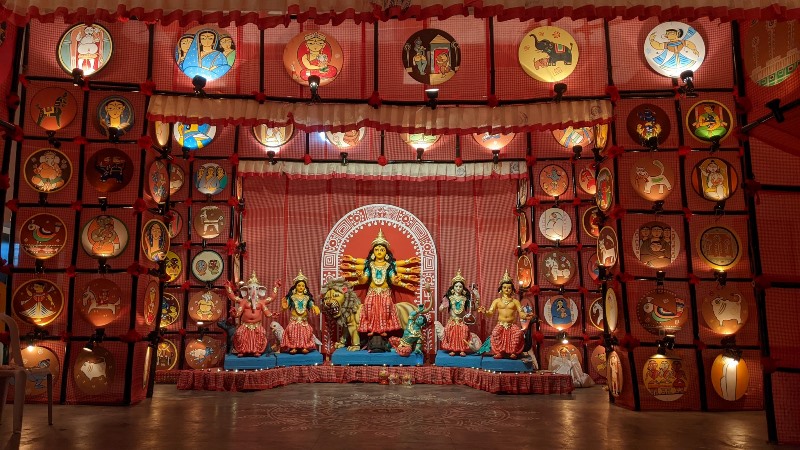 Durga Puja: Kolkata made in Bangalore

Bengaluru Bengalis are thrilled beyond words to soak in the pujo vibes again after two long years. Around 109 pujo pandals have mushroomed across the length and breadth of the IT city. The charm and thrill of pandal hopping is back.

While in Kolkata pujo pandals have themes which attract huge crowds and attention, Bangalore pandals pales in comparison. The various associations involved focus more on the idols, puja and the variety of entertainments held.

They make efforts to get music bands from West Bengal that hold the audience enthralled. Some of them charge as high as Rs 65,000-Rs 120,000 for a gig, if one were to go by previous records.

Food stalls that sprout up for the four days of Pujo are another attraction to the pandals both for Bengalis and the locals alike.

Pandals, a temporary structure set up to usually venerate the god and goddess, are probably the last thing they invest on. 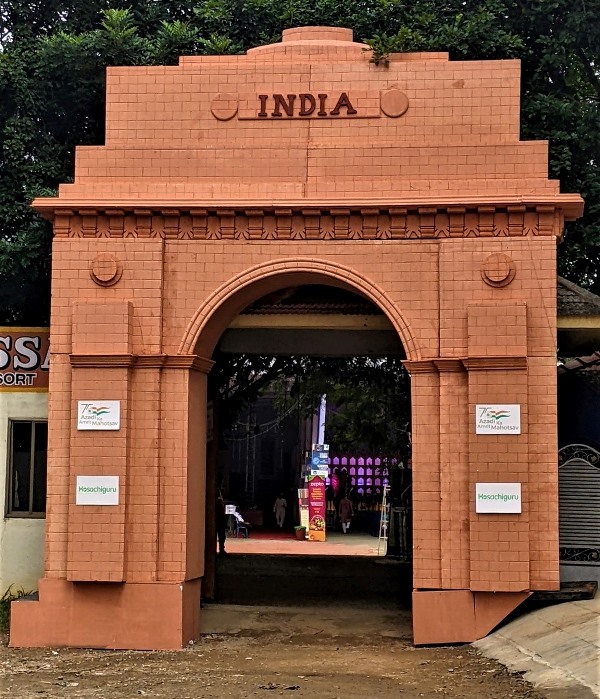 However there are a few Bengali associations of Bengaluru that have held forts (read pandal). BARSHA (The Bengali Association for the residents of Sarjapur and HSR Layout area) have themed the pandal decorations on Indian monuments like India Gate and Vidhana Soudha this year.

The paintings have the influence of Jamini Roy art, and the subjects are Gods, Goddesses and rural themes. But these are mainly interior decoration, not the pandal as such.

The most striking, and heart-stirring one is the Oikotan Pujo pandal that has the replica of Jorasanko Thakur Bari, the ancestral home of Nobel Laureate Rabindranath Tagore.

Those who have been to the great man’s house will feel the striking resemblance right at the entrance. The green windows with semi circle arched window frames, with colourful patches that remind of the stained glass fitted on the frames, the black and white checked floor paint are almost a replica. The place where the idols are placed is similar to the verandah in Jorasanko Thakur Bari. 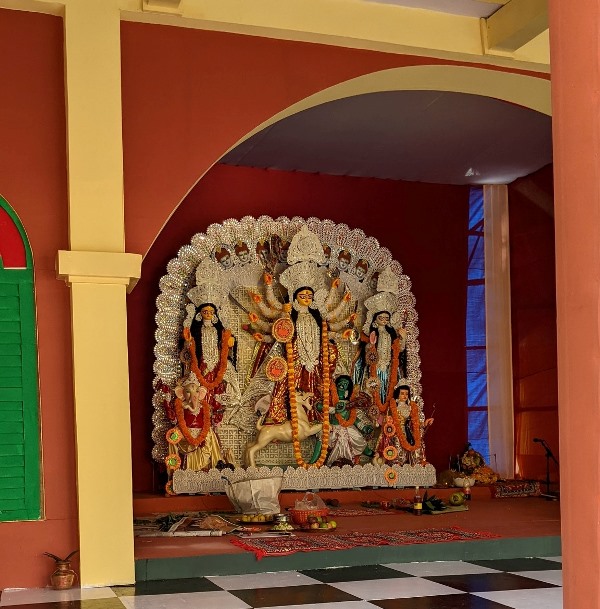 There are informative pictures of historic landmarks of Kolkata. The walls of the pandal are decorated with kali bari patta chitra style paintings.  Each painting took around two days or more depending on the complexity of the painting.

Materials and artists were brought in from Kolkata. The erection of the whole pandal took close to 55 days! The team was led by Pandal artist Suraj Bhattacharaya. A graphic designer by profession, he is passionate about Kolkata culture and tries to depict them through art, in the process trying to create awareness among the younger generation. In the year 2019 too he had done the pandal decoration in Oikotan Association. The theme was based on Chau dances then.

According to Indrajit Bose, who is part of the pujo committee in Oikotan, they have themed the pandal on cultural richness of Kolkata, naming it Phire Dekho Kolkata. “The present generation will never know what Kolkata was like in yesteryears,” he says ruefully.

The ‘hath tana’ (pulled by hand) rickshaws surprised the kids visiting the pandal. Not having seen its kind in Bangalore roads, the concept of a man pulling the rickshaw with people seated on them was a surprise for them. 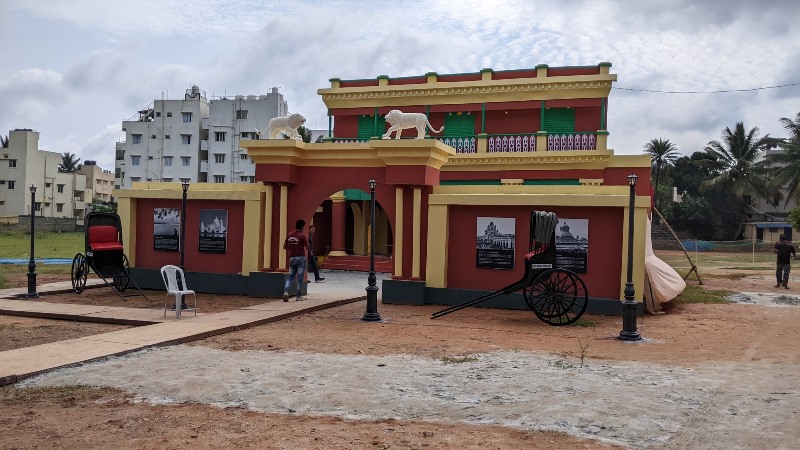 So, what will be done with the models of the rickshaw and the artwork after pujo is over, is a question on visitors’ minds. The look is so real, they don’t have the heart to dismantle the rickshaws or put the art on scrap. Some have even expressed the desire to buy them off.

Suraj hopes to come again in the next Pujo with a new theme, new designs. Maybe more pujo associations will look to create more pandal themes. As long as this trend continues to bring Kolkata, West Bengal, bit by bit to Bangalore, the memories of that era will never fade.

(Indrani Ghose is a freelance writer and photographer based in Bangalore, India.)

(For media collaborations with our multiple portals and platforms, write to the Editor, IBNS at sujoydhar@gmail.com / indiablooms@gmail.com  👉  Media Deck)