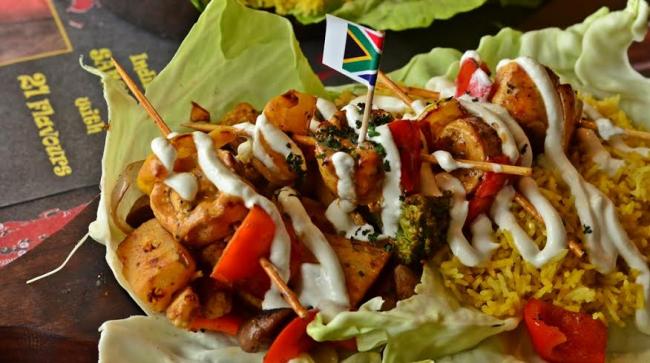 India Blooms News Service | | 16 Jul 2016, 12:30 pm
#Barcelos Kolkata adds sizzlers to its menu
Kolkata, Jul 16 (IBNS): Just as the coloured burgers were an instant hit, Barcelos Kolkata's grilled sizzlers too caught the dinerâ€™s fancy as was evident on the launch day of the festival at the restaurant at Acropolis Mall, on Thursday.

For its Sizzler Festival, Barcelos has brought together select sizzlers from around the world. The country list includes South Africa, Turkey, Portugal, Lebanon and Afghanistan.

“We have tried to retain the authentic flavour of the dish, occasionally tweaking a thing or two to accommodate vegetarian diners or to suit the Kolkata palate,” explained Chef Soumik Rooj. For example, the Chicken Trinchado Sizzler from Portugal became Paneer Trinchado in its vegetarian avatar.

Some of the other sizzlers include Peri Peri Chicken (South Africa), Mutton Kebab (Turkey), Chicken Sizzler with Hummus (Lebanon), Mutton Keema (Afghanistan) and Grilled Fish (Portugal). All of these are available in vegetarian options, the meat replaced with soybean, paneer or vegetables.

As the sizzling platters were brought to the table, a thin smoke masked the content but could not hide the aroma. And as the smoke cleared, we noted each dish was plated with care, the colour and texture of the ingredients well balanced. A flag was pinned to every dish to help us identify the country to which it belonged. The photographers had a field day, capturing the spread. Unfortunately, it also made our food go cold.

Indranil Roy Chowdhury, Director of Trivia Food and Beverages (which holds the exclusive rights for the Barcelos brand in eastern India), said, “Barcelos is all about innovating with food retaining the quality and the taste.”

India’s lone entry to the menu was Vegetarian Seekh Kebab Sizzler. Hope Barcelos will delve a little more into Indian cuisine and innovate further to surprise us with some new fusion dish.

Barcelos is located in the fourth floor of Acropolis Mall (next to Gitanjali Stadium, Kasba) Kolkata. Open between 11 am and 11 pm.