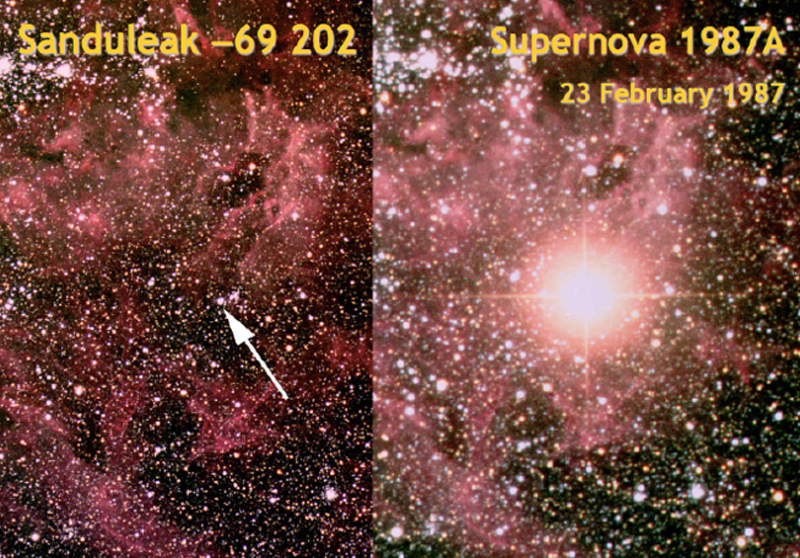 Guwahati: Researchers from the Indian Institute of Technology Guwahati (IIT-G), in collaboration with researchers from Max Planck Institute for Physics, Munich, Germany, and Northwestern University, USA, have revealed important clues to understand the death of massive stars and have also revealed the problems with the existing models.

They found that all three species of the neutrinos from the supernovae are important contrary to the common treatments with only two flavors.

The results of the crucial work have been recently published in the journal, Physical Review Letters (PRL), and has garnered worldwide attention from the astrophysics community.

Supernovae: the super explosions at the time of death of large massive stars are considered to be the cradle of birth for new stars and synthesis of the heavy elements in nature. At the end of their life, the stars, especially massive ones, collapse resulting in an immense shock wave that causes the star to explode, briefly outshining any other star in its host galaxy.

The study of supernovae and the particles they release helps us understand the universe because almost all matter that makes up the universe is a result of these massive explosions.

“However, the mechanism of these super explosions is not yet completely solved and has remained one of the enigmas of nature,” Dr. Sovan Chakraborty of Assistant Professor, Department of Physics, IIT Guwahati said.

The solutions to the toughest challenges to the core collapse mechanism of the huge supernovae come from the tiniest subatomic particles called neutrinos.

During the core collapse supernova explosion, neutrinos are created in several particle processes. Due to their neutral nature and extremely weak interaction with stellar matter the neutrinos escape the dying star and carry 99% energy of the collapsing star.

Thus, the tiny neutrinos are the only messenger bringing information from the deepest interiors of the star.

The Nobel physics prize in 2002 was shared by Masatoshi Koshiba for the detection of neutrinos from the Supernova SN1987A at the Kamiokande neutrino detector situated in Japan.

Neutrinos on the other hand have their own complexities. In the last seven decades after the discovery of neutrinos physicists have come a long way in understanding these incredible particles.

However, there are still many open questions like understanding their flavor structure and the ordering of the masses of different neutrinos.

In fact, supernovae are the only natural source where neutrinos and antineutrinos of all three species (electron, mu and tau ‘flavors’) are produced in substantial amounts. This creates additional complexities.

However, the existing supernovae models predicted that the mu & tau neutrinos & antineutrinos have very similar properties and are considered as a single species. This simplified the supernova neutrino problem and most studies are done under the assumption that all types behave the same way when ejected from the star’s dying core.

Speaking about this Dr. Sovan Chakraborty explains – “This information is very crucial for the reason that in the extremely dense supernovae core neutrinos interact with other neutrinos and may interchange flavors. This conversion may happen rapidly (in nanosecond time scale) and flavor interchange can affect the supernovae process as the different flavors are emitted with different angular distribution. These ’fast' conversions are nonlinear in nature and are not confronted in any other neutrino sources but supernovae. We for the first time did a non-linear simulation of fast conversion with ‘all’ the three neutrino flavors in supernovae.”

This becomes possible as new supernova simulations show the presence of muons in the supernovae and in turn produce asymmetry between muon neutrinos and antineutrinos, taken to be zero otherwise, implying three flavor effects.

Co-author Dr. Manibrata Sen pointed out, “These three flavor studies change the results dramatically in comparison to the existing two flavor results and can have major implications for particle and astrophysics of supernovae neutrinos.”

Dr. Francesco Capozzi, presently a Postdoctoral fellow at the Virginia tech University, USA cautioned, “The models used in our research work too have some simplifications, more generic studies are being done by our team and other competing groups. The clearer answers will need more precise muon supernova simulations which are appearing to be one of the most promising solution to the problems of core collapse mechanism.”

Meanwhile, these new results give a clear message that the differences between the three flavors of neutrinos are all relevant, and ignoring the presence of any of the flavors gives us an incomplete picture of fast flavor exchange.

Dr. Chakraborty said,  “Three flavor studies are essential as the fast oscillations may actually influence the solution to the question, i.e., why and how some massive stars die as supernovae and some don't.”