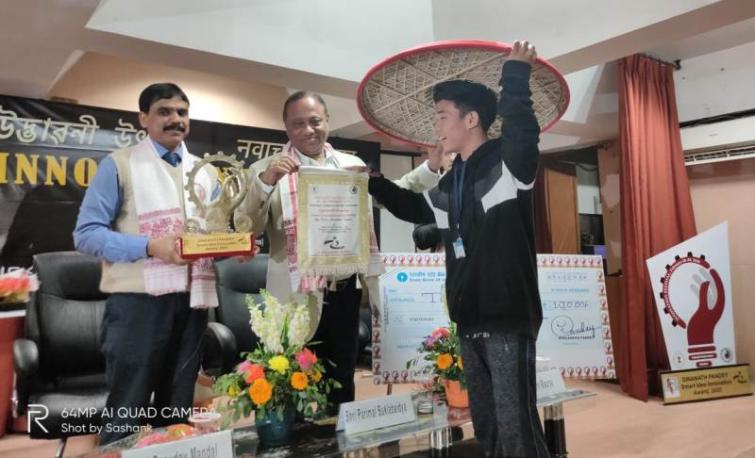 Prior to this, innovators from the NE states and West Bengal participated in the two-day exhibition ‘Innovation Festival’ on February 8 and 9 at the premises of Regional Science Centre in Guwahati.

There were more than 34 participants. They displayed their various innovative devices.

The award has been instituted by the family of Dinanath Pandey who was a master innovator and tried to change the way of life by his innovations.

The ‘Innovation Festival’ which has been organized by Indian Council for Science Museum in collaboration with National Innovation Foundation (NIF) provides a common platform to the people of all the states in northeast region working in different fields like innovators, artists, performers, crafters and science-demonstrators among others showcasing their creativity.

Ha Tade from Arunachal Pradesh won the Dinanath Pandey Smart Idea Innovation Award 2020 for his innovation SOFT.SPY, a device which helps in recording the minute details of a vehicles movement – both two-wheelers and four wheelers.

A Bachelor of Technology from North East Regional Institute of Science and Technology Nirjuli of Arunachal Pradesh, Tade is excited to win the award.

“I’m really happy for this. I wanted that my idea reach to the people and it’s great to be here and share my idea. I will try to improvise it to make it more user friendly and also at a cheaper cost,” Tade said.

He said that the idea came to his mind following an accident of a distant relative in their family in a road accident two years back.

Tade also gave the credit of installing the idea in his mind by his sister.

On the other hand, Sailen Pandey - son of Late Dinanath Pandey said that, his family has given this award to the innovators of the North Eastern by aiming to promote innovation among the young generation.