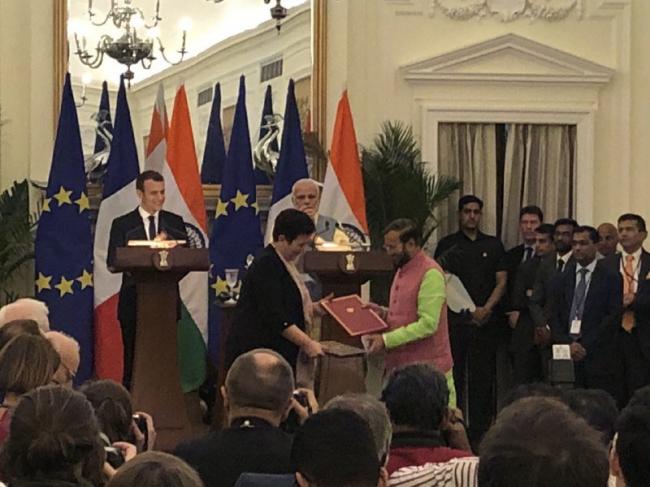 New Delhi, Mar 11 (IBNS): The first ever Indo-French Knowledge Summit ended successfully with a landmark agreement on mutual recognition of educational qualifications between the two countries and a record 15 other MoUs between universities and research institutions on joint initiatives and partnerships.

The two-day summit was held in New Delhi and coincided with the state visit of French President Emmanuel Macron to India.

The summit was organized by the French Embassy in India and co-hosted by the Ministry of Human Resource Development, Government of India.

More than 350 people from nearly 80 Indian Institutions and 70 French Institutions  along with key enterprises participated in the Summit which also received the support of the Ministry of Science and Technology, Campus France and Confederation of Indian Industry.

Addressing the participants at the closing session, Union Human Resource Development Minister, Prakash Javadekar congratulated both the Governments for extending cooperation in finalization of agreement on mutual recognition of academic qualifications.

This agreement will go a long way in boosting the educational relationship between the two countries, will encourage mobility of students from both the countries by facilitating possibilities for them to continue their studies in the other country and would also promote excellence in higher education through cooperation, university and research exchanges, the HRD Minister explained.

Elaborating further, Javadekar said that the Government will soon launch its Study in India Programme to encourage more foreign students to take up education in India.

Javadekar also mooted the idea that both the countries should also look at the possibilities of allowing professionals to practice in each other’s country on reciprocity basis.

The HRD Minister disclosed that a Joint Working Group between the two countries will be formed to take ahead the bilateral cooperation in education and research.

"The JWG will meet in September," he said.

The Minister of Higher Education and Research and Innovation, Frederique Vidal, in her remarks at the closing session said that education can become an effective weapon to fight poverty and inequality.

She emphasized that for a meaningful cooperation, there is a  need to simplify administrative procedures to increase student mobility, to address all academic issues to promote cooperation as well as foster new partnerships between Institutions for the future.

Vidal said that the recommendations by Round Table Chairs will guide the Indo-French cooperation in education and research over the next five years.

A Franco-Indian Education Trust was also unveiled at the closing session today.

It will be funded by the Indian industry and French Companies in India to offer educational scholarships and merit based financial support to Indian students.

The Knowledge Summit is the First Franco-Indian Summit for university, scientific and  technology cooperation with the broader objective to design a roadmap of Franco-India cooperation for the next five years, in collaboration with companies.

During this event, various sessions and Round Tables on several topics of mutual interest of  both the countries took place including aerospace, agriculture and food processing, eco-energy, maths and information technology, strengthening employability among others.

The participants, including the heads of academic institutions of both India and France, industry experts, scientific community enthusiastically took part in the event and made the event successful.