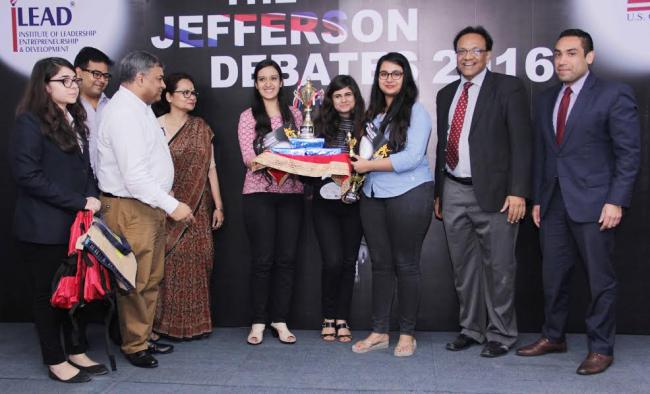 India Blooms News Service | | 11 Aug 2016, 02:11 pm
# iLEAD , # American Center, # Jefferson Debate
Kolkata, Aug 11 (IBNS): Reputed colleges of the city participated in a fierce battle of words and reasons, as the American Center (US Consulate), in association with iLEAD presented â€˜Jefferson Debatesâ€™ on the 10th of August. In its 5th edition, the Debate was a resounding success as participants spoke for and against the motion, â€˜Presidential Systems tend to focus Electoral Campaigns on Personalities rather than Political Platformsâ€™.

Six teams stood for the motion, with an equal number offering their opinions against the motion. No participant was allowed to exceed the time limit of four minutes offered to each.

He said, “I am happy we partnered with iLEAD to host the Jefferson Debate and even more honored to moderate the debate between these young brilliant minds. The U.S. Presidential elections do serve as example for the world and it is great that these young students are observing them.”