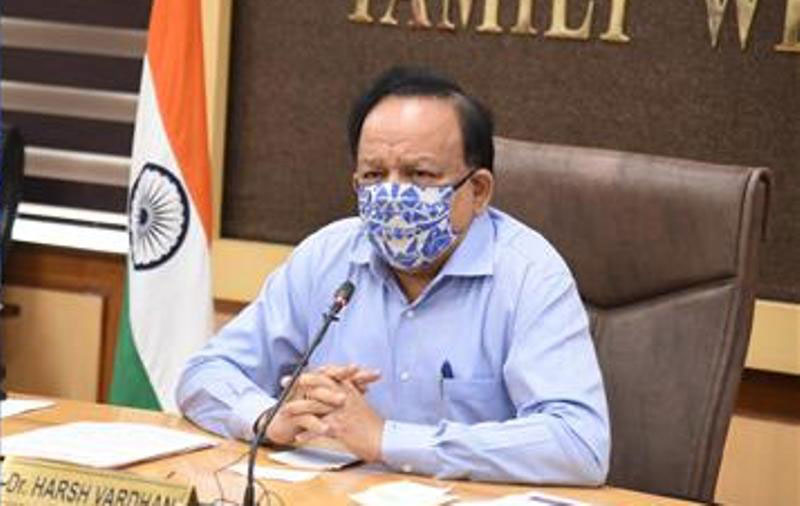 India has one of the lowest case fatality rates globally, which is steadily decreasing: Dr Harsh Vardhan

New Delhi: Harsh Vardhan, Union Minister of Health & Family Welfare, chaired the 19th meeting of the high-level Group of Ministers (GoM) on COVID-19 by a video-conference, here on Friday.

At the outset, the GoM was briefed on the current status of COVID-19 in India. Dr. Harsh Vardhan stated, “India has achieved the milestone of more than 1 million recoveries which has taken the Recovery Rate to 64.54%."

"This shows that the active cases under medical supervision are only 33.27% or approximately 1/3rd of total positive cases.

"India’s Case Fatality Rate is also progressively reducing and currently stands at 2.18%, one of the lowest globally," the Minister said.

While speaking on the severity of cases found in India, Dr. Harsh Vardhan said: “Out of the total Active Cases, only 0.28% patients are on Ventilators, 1.61% Patients needed ICU support and 2.32% are on Oxygen support”.

On the rapidly expanding testing capacity of India, the Union Health Minister highlighted that as on date, through a network of 1331 labs (with 911- Government labs and 420 private labs), India has conducted a record 6,42,588 tests in the last 24 hours.

This has taken the cumulative tests to more than 1.88 crore.

The GoM was also apprised of the ramping up of the domestic production capacities of various sectors for manufacturing PPEs, masks, ventilators and drugs such as HCQ.

In terms of healthcare logistics, cumulatively 268.25 lakh N95 masks, 120.40 lakh PPEs and 1083.77 lakh HCQ tablets have been distributed to States/UTs and Central Institutions.

The GoM was briefed that overall recovery rate for India is 64.54% with the highest recovery rate being recorded by Delhi at 89.08%, followed by Haryana (79.82%).

Karnataka has the lowest recovery rate of 39.36%. GoM was apprised on the distribution of confirmed cases along with locality and active cases in the containment zones across rural and urban India.

He highlighted that efforts are being made to reduce mortality in high case load districts / cities and cities showing recent upsurge like Pune, Thane, Bengaluru, Hyderabad etc.

In moderate case load districts/cities, the efforts would focus on preventing spill-over from the high burden areas; limiting local spread; early identification of cases; strengthening contact tracing with the use of technology; and community involvement.

As for the low burden districts, the efforts aim at preventing infection among the population from other areas; strengthening Influenza Like Illness (ILI).

Severe Acute Respiratory Illness (SARI) surveillance and targeted testing; rigorous contact tracing with targets to be set by the local administration (>15-20 contacts/case); and prior identification of high risk population.