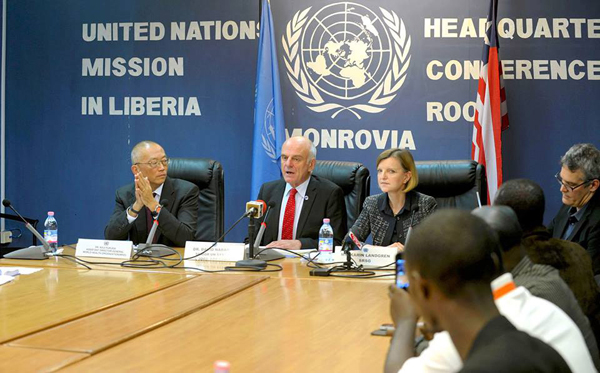 India Blooms News Service | | 23 Aug 2014, 12:04 pm
#Ebola, # World Health Organization
New York, Aug 23 (IBNS) David Nabarro, Senior United Nations System Coordinator for Ebola who was appointed by the Secretary-General to establish how best the UN can support affected communities, was wrapping up the first leg of a visit to all Ebola-effected countries in West Africa.

In the Liberian capital, Monrovia, this afternoon, he told reporters at the end of his two-day visit that more health workers will be brought to the country to deal with the outbreak, saying “The United Nations is looking at ways to radically scale up support to fight Ebola.”  Keiji Fukuda, UN World Health Organization (WHO) Assistant Director-General for Health Security, who is travelling with  Nabarro, said at the press conference: “This is not a hopeless situation.” Also at the same press conference, Karin Landgren, Special Representative of the Secretary-General and Coordinator of UN Operations in Liberia, said that UN peacekeepers were not involved in quarantining people due to Ebola. Meanwhile, the Geneva-based WHO said in its latest update that the magnitude of the Ebola outbreak, especially in Liberia and Sierra Leone, has been underestimated for a number of reasons. In parts of Liberia, WHO said, a phenomenon is occurring that has never before been seen in an Ebola outbreak. As soon as a new treatment facility is opened, it is immediately filled with patients, many of whom were not previously identified. For example in Monrovia, it said, an Ebola treatment centre with 20 beds, which opened last week, was immediately overwhelmed with more than 70 patients. “This phenomenon strongly suggests the existence of an invisible caseload of patients who are not being detected by the surveillance system,” the UN health agency said. WHO said: “Many families hide infected loved ones in their homes. As Ebola has no cure, some believe infected loved ones will be more comfortable dying at home. Others deny that a patient has Ebola and believe that care in an isolation ward – viewed as an incubator of the disease – will lead to infection and certain death.” The health agency went on to say that in rural villages, corpses are buried without notifying health officials and with no investigation of the cause of death. In some areas, most notably Monrovia, virtually all health services have shut down. Meanwhile, WHO reiterated that it does not recommend any ban on international travel or trade. It stresses that closing borders doesn’t work and is detrimental, as affected countries will be pushed towards a humanitarian crisis and the international community’s ability to fight and reverse the Ebola outbreak will be hampered. WHO and the rest of the UN system also continue to highlight that the virus is not airborne and that becoming infected requires direct physical contact with body fluids of people who have been infected or died from Ebola.