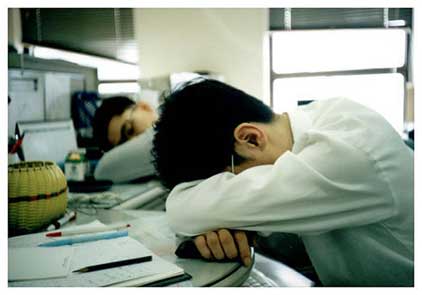 India Blooms News Service | | 16 Jun 2016, 12:37 am
#Sleepiness, # fatigue
New York, June 16 (IBNS): A new study found that normal older adults who experience excessive sleepiness during the day or significant fatigue may have more brain atrophy than expected for their age, particularly in areas of the brain that are more susceptible to aging and Alzheimer's disease.

Results show that subjects with excessive daytime sleepiness or fatigue not only had more disturbed sleep, but also significantly lower cognitive scores and more medical comorbidities.

"Our results may help to identify individuals at higher susceptibility or risk for dementia prior to symptom onset so that appropriate interventions can be undertaken early to prevent progression to dementia," said lead author, Diego Z. Carvalho, MD, a resident physician of neurology at the Mayo Clinic in Rochester, Minnesota.

The research abstract was published recently in an online supplement of the journal Sleep and will be presented Tuesday, June 14, and Wednesday, June 15, in Denver at SLEEP 2016, the 30th Anniversary Meeting of the Associated Professional Sleep Societies LLC (APSS).

In the Mayo Clinic Study of Aging, the authors identified 1,374 cognitively normal elderly aged 50 years and older who completed sleepiness and fatigue surveys and had a baseline structural magnetic resonance imaging (MRI). Excessive daytime sleepiness was defined as Epworth Sleepiness Scale of 10 or more. Fatigue severity was assessed with the Beck Depression Inventory-II.

The study was supported by the National Institute on Aging.