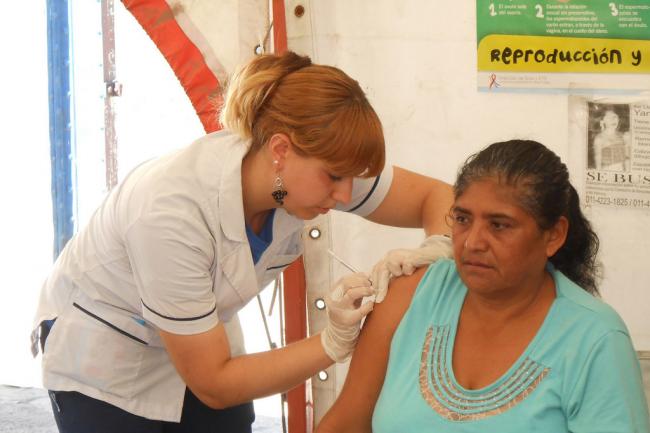 India Blooms News Service | | 24 Jul 2015, 09:52 am
#UN health , # World Hepatitis Day
New York, July 24 (IBNS) The World Health Organization (WHO) announced on Thursdaythat it will commemorate the fifth World Hepatitis Day next week with a global ?injection safety initiative campaign in three pilot countries together with the foundation arm of IKEA to combat the "silent epidemic" that kills more than 1.4 million each year.

“Egypt, Uganda and India are three of the flagship countries that will be taking on the first steps on this campaign,” Dr Edward Kelley, WHO’s Director of Service Delivery and Safety told reporters in Geneva, Switzerland.

The global campaign is designed to raise public awareness for safe injections to combat Hepatitis B and C, ministry engagement for national plans to deal with the infections and to engage the private sector, including the syringe manufacturing community, Dr. Kelley said.

He also noted that the most frequent medical procedure in the world on Thursdayis administering of injections, “about 16 billion a year and the rate of unsafe injections of those 16 billion – the estimate is up to 40 per cent.”

At the press conference devoted to World Hepatitis Day, which falls on July 28 – the birthday of the American scientist Baruch Blumberg who is associated with his work on the hepatitis B – the UN health agency highlighted the urgent need for countries to urgently enhance action to prevent viral hepatitis infection and to ensure that people who have been infected are diagnosed and offered treatment.

“We estimate about 1.4 to 1.5 million deaths every year from all the various types of hepatitis. That put it about the seventh leading cause of death,” he said. WHO’s flagship event next week takes place in Egypt, a country the health agency says has one of the world’s highest hepatitis burdens.

“It is estimated that 10 per cent of the ?population between 15 and ??59 years is chronically ?infected with hepatitis C,” WHO said in a fact sheet. It adds that between 2007 and 2014, more than 350,000 people with hepatitis C have been treated. Since the introduction of newer, more effective medicines in 2014, the number of people being treated continues to increase.

WHO emphasizes the need for all health services to reduce risks by using only sterile equipment for injections and other medical procedures, to test all donated blood and blood components for hepatitis B and C and to promote the use of the hepatitis B vaccine. Safer sex practices, including minimizing the number of partners and using barrier protective measures (condoms), also protect against transmission.

The WHO officials also noted that the prices of medicines have come down considerably in developing countries where generic drug manufacturers being able to produce the drugs at lower costs but that the challenge remained in middle-income countries such as Russia, China and Ukraine where pharmaceutical companies were trying to make a profit by negotiating country by country.

Both officials also stressed the importance of treating hepatitis “comprehensively.”

“We have to push prevention and we have to push treatment,” Dr. Wiktor said. “What we are really promoting is that countries address hepatitis comprehensively.”

Dr. Wiktor announced that in September this year, countries will have the opportunity to share best practice at the first-ever World Hepatitis Summit to be held in Glasgow, Scotland.

The summit, which is co-sponsored by WHO and the World Hepatitis Alliance, aims to raise the global profile of viral hepatitis, to create a platform for exchange of country experiences and to focus on working with countries to develop national action plans.