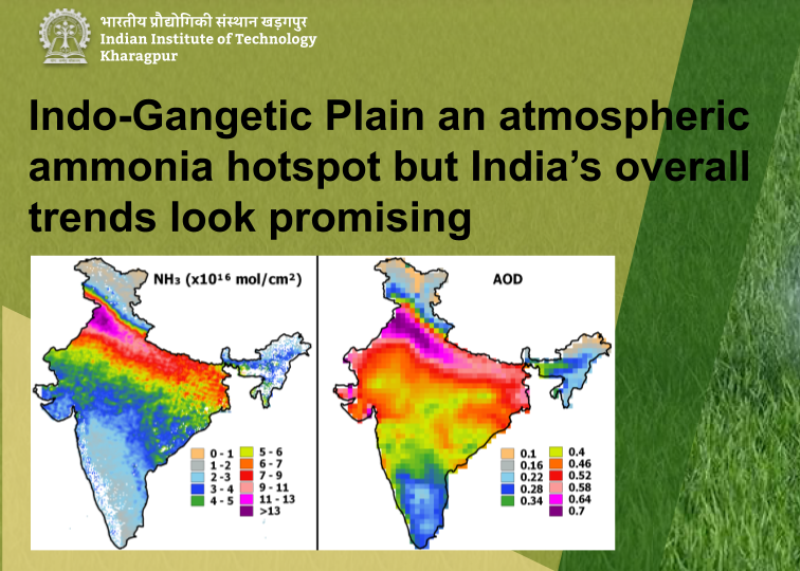 Kharagpur (WB)/IBNS: Researchers from IIT Kharagpur in collaboration with IITM Pune and European researchers conducted a study involving the analysis of the seasonal and inter-annual variability of atmospheric ammonia emitted by the agricultural sector.

Agro fertilizers containing high levels of ammonia have long been designated as a hazardous material for human health.

The results of this first of its kind analysis are in agreement with the long-held apprehension of global environmentalists - the Indo-Gangetic Plain (IGP) is indeed the global hot-spot of atmospheric ammonia (NH3) due to intense agricultural activities and fertilizer production there, the researchers said.

Using IASI satellite measurements to analyze the seasonal and inter-annual variability of atmospheric NH3 over India for the period 2008–2016, the researchers observed atmospheric ammonia growing rapidly at a rate of 0.08 per cent annually during the summer-monsoon (Kharif crop period) season from June to August.

The study further confirmed a direct correlation between NH3 emissions and fire counts and reports a high volume of atmospheric ammonia in the same season.

They delineated the data for global industrial, agricultural, and natural NH3 hotspots.

Atmospheric ammonia is typically generated due to agricultural activities including the use of nitrogenous fertilizers, manure management, soil and water management practices and animal husbandry.

It is very dynamic as it is constantly exchanged between the atmosphere and biosphere.

In India, there has been a lack of detailed information about atmospheric ammonia, which is a significant contributor to atmospheric pollution and deterioration of air quality.

This is particularly important for IGP as there are many cities including New Delhi.

Apart from IGP, data from across the country show some regional hotspots in northwest and southeast India.

The study also mentions that there are positive trends in atmospheric NH3 over the agricultural areas of the United States, China and Europe, about 1.8–2.61 per cent annually, depending on regions.

However, the general trend in atmospheric ammonia over India is negative in most seasons. “Observing the overall trend, we can therefore assert to have sincere to our pledge at the Paris Climate Summit towards reducing atmospheric emissions through initiatives under the National Clean Air Programme though we have to be relentless in our efforts to reduce the emissions at the Indo Gangetic Plain, which would otherwise have detrimental effects on the human health, ecosystems and climate,” said Prof. Kuttippurath.

Deliberating on possible remedies, co-authors Ajay Singh and Prof. Nirupama Mallick from the IIT Kharagpur’s Department of Agricultural and Food Engineering emphasized the wider adoption of precision farming along with seasonal restrictions on the use of fertilizers.

Said Prof. Nirupama Mallick, “Agriculture, in its conventional form, contributes significantly to the atmospheric emission of gaseous ammonia that plays a key role in the deterioration of air quality over the whole of India by actively contributing to the formation of secondary aerosols. This demands regulations on the amount of fertilizer application in cropping seasons in arable lands, in place of conventional blanket recommendation practices, along with viable strategies to curb farm emissions.”