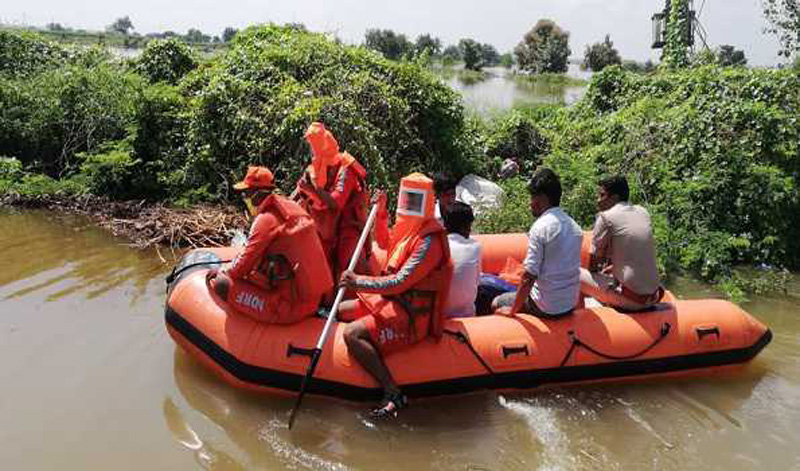 Kalaburagi/UNI: Fresh rain in the catchment area of River Bhima in Karnataka and other places in Kalaburagi, Vijayapura and Yadgir district has deteriorated the flood situation in the state.

Several villages on the bank of River Bhima have gone under flood water after the heavy discharge of water into the river from Sonna barrage.

The NDRF team and Army jawans rescued hundreds of people stranded in the floodwater and sent them to relief centres.

The release of water from Sonna barrage came down to 3.92 lakh cusec on Tuesday morning from 8.20 lakh cusec. Vehicular movement on a bridge, constructed near Katti Sangavi which connects Kalaburagi with Jewargi, was stopped on Monday also.

About 28,637 people took shelter in 162 relief centres opened across the district.

Flood water entered into the houses located near the riverbank in Saradagi (B), Firozabad in Kalaburagi taluk, Rasanagi, Handanur and Harawal villages in Jewargi taluk and the residents have been shifted to relief centres.

The people, who are taking shelter in the relief centres for the past two days, brought their belongings from their houses by using a coracle. A total of 157 villages in six taluks of the district are facing the flood threat and initially, 27,378 people from 73 villages have been shifted to safer places with the help from the teams of NDRF, Fire and emergency services department.

Two helicopters, kept standby, are yet to be utilised for the rescue operation. As water entered into Kona Hipparga village in Jewargi taluk, the NDRF team and Army’s jawans rescued the residents and shifted them to a relief centre at Koodi village.

The rain, which gave a break for the past two-three days, lashed Kalaburagi city and parts of Jewargi taluk.

Meanwhile, the people are leaving their homes in fear because of fluctuation in water release from barrages and reservoirs.

Though flood subsided a little in Afzalpur taluk, the situation continued to grim in Kalaburagi, Jewargi, Chitapur and Shahabad taluk. Bhagyavanti temple in Mahur village has also submerged.