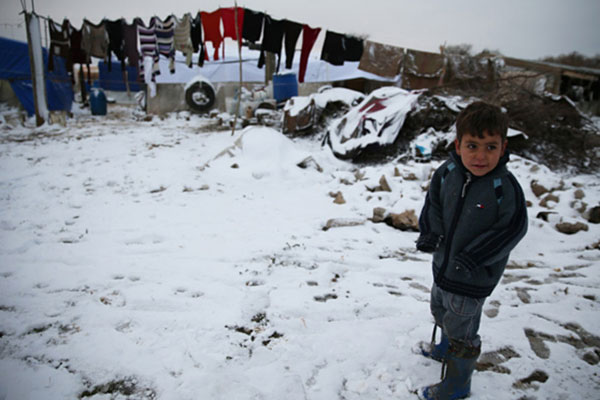 India Blooms News Service | | 15 Nov 2014, 02:53 pm
#Syrian
New York, Nov 15 (IBNS): As the United Nations moves to broker a â€œfreezeâ€ of the ongoing Syrian conflict, the world bodyâ€™s humanitarian agencies are continuing with their deliveries of critical assistance to civilians in the Middle Eastern countryâ€™s besieged areas in anticipation of an expectedly harsh winter.

Speaking to reporters in Geneva, World Food Programme (WFP) spokesperson, Elizabeth Byrs, confirmed that earlier this week, a 23-truck convoy had entered the war-ravaged neighbourhood of Al Wa’er in Homs, delivering 12,000 WFP food rations and other humanitarian supplies for some 60,000 civilians.

The convoy managed to break through the frontlines on 11 November following “intense negotiations” and a previous attempt which had been aborted due to “continuous and heavy bombardment,”  Byrs explained.

Al Wa’er and its estimated 125,000 inhabitants have been under partial siege since October of last year, receiving only limited and irregular supplies. At the press briefing,  Byrs noted that the WFP’s last shipment to the area was in September when only 200 rations, sufficient for only 1,000 civilians, had been delivered.

Echoing WFP’s remarks, Jens Laerke, for the Office for the Coordination of Humanitarian Affairs (OCHA), pointed out that an additional convoy of seven trucks had entered Al Wa’er on 12 November bringing 60,000 people non-food items of which they had been “deprived for a very long time.”

Meanwhile, Christophe Boulierac of the UN Children’s Fund (UNICEF) voiced his agency’s concern over the conditions facing the 7 million Syrian and Iraqi child refugees ahead of the fast-approaching winter.

Boulierac told reporters that UNICEF had begun its winterization efforts, distributing clothing and materials to prevent colds and related diseases to one million of the most vulnerable children. But, he cautioned, the agency faced “two obstacles for the distribution: access and funding shortages.”

At a briefing late last month, in fact,  Boulierac warned that UNICEF had only received 50 per cent of the funds it requested and still required some $94 million by the end of the year in order to maintain humanitarian operations in the country. Without the injection of funding, the agency risked reducing or “completely bringing to a halt” some of the assistance it was providing to the children in need inside the country.

Currently, UNICEF was working to assist 400,000 internally displaced children across Syria but, due to the funding shortage, only 217,000 winter kits had been purchased for distribution in the four priority areas of Homs, Tartous, Aleppo, and Qamishly.

“Access to many areas remains limited or impossible due to ongoing fighting,” he added.

The conflict in Syria, which began in March 2011, has led to well over 150,000 deaths, and more than 680,000 people have been injured. It has also spawned a refugee crisis in which some 2.5 million people are being sheltered in neighbouring countries. At least 10.8 million people are in need of assistance inside Syria, including at least 6.5 million who are internally displaced.

At the same time, the civil war has fractured amid the introduction of a number of militant groups vying for control of Syria’s cities, including the Islamic State of Iraq and the Levant (ISIL), whose ongoing siege of the Syrian border town of Kobane has added to the humanitarian crisis of displaced persons and refugees.

A Syrian refugee boy stands in the snow in the Faida informal tented settlement in the Bekaa Valley, Lebanon, in December 2013. Photo: UNICEF/Dar Al Mussawir