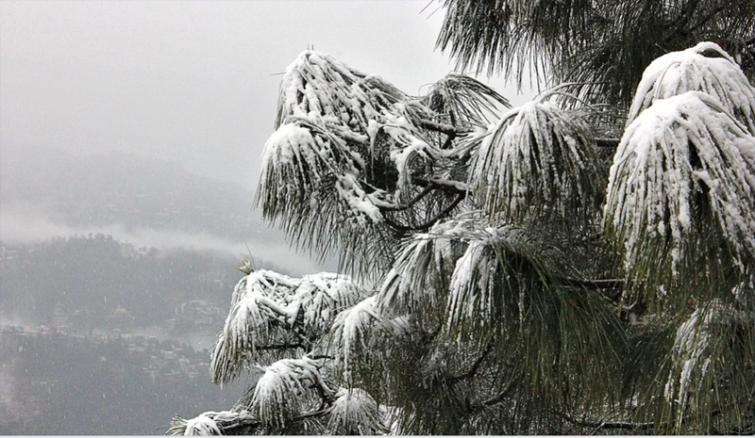 Shimla/UNI: A white blanket enveloped large parts of this hill state on Monday, especially tourist resorts, including Shimla, Kufri, Narkanda, Manali and Dalhousie, turning everything, from trees to mountains to cars frosted, while leaving few national highways and many major roads and link roads, snow-bound.

The high reaches of Himachal Pradesh were experiencing moderate to heavy snowfall, while the downstream experienced intermittent rainfall, as it was mainly overcast in the state.

Jhandutta in Bilaspur received 30 mm rain, Ghumarwin 25 mm, Wangtoo in Kinnaur 23 mm, Baldwara in Mandi and Jubbal in Shimla 22 mm each, Seobagh in Kullu 19 mm, Rampur in Shimla and Sarkaghat in Mandi 18 mm each, Bhuntar in Kullu, Pachhad in Sirmaur and Kandaghat in Solan 17 mm each, Bhoranj in Hamirpur, Gohar in Mandi, while Sangrah in Sirmaur, Rohru and Jubbar Hatti in Shimla recorded 16 mm each rainfall.

Vehicular traffic to Narkanda, Rampur and Kinnuar was diverted via-Dhami and Basantpur route and many HRTC services were suspended.

Bus services for Chopal and Kharapather was via Solan and Poantashahib. Power and water supply was also disrupted in Bagi area of Theog, Rohru, Chaura and Tikkar area of Shimla, Deputy Commissioner of Shimla Amit Kashyap confirmed.

Dharmshala had six mm rain, Bhuntar and Jhungi got five mm rainfall, Srahan in Sirmaur, Thanaplan in Hamirpur, Mandi and Kangra got four mm each, , Jawali and Sundernagar in Mandi three mm each, Una and Chmaba two mm.

The latest, which is second in the last three days, is likely to increase the footfall of tourists and help the ailing tourism industry of the state, with increasing economic activities.

All the high reaches experienced snowfall in the state and downstream recorded light rainfall.

Thick fog engulfed mid and foothills in the morning, reducing the visibility during the day.

Minimum temperature of Keylong recorded minus seven degrees, Kalpa in Kinnaur, Kufri minus 3.4 degrees each, Manali minus 1.4 degrees, Dalhousie minus 0.4 degrees and Shimla minus 0.1 degrees.

Warning of heavy snowfall or rain was also made in the isolated places in the next 24 hours.

The Met Office has forecast rain or snowfall in most places in mid and high reaches and many places in the foot hills in the next 24 hours.