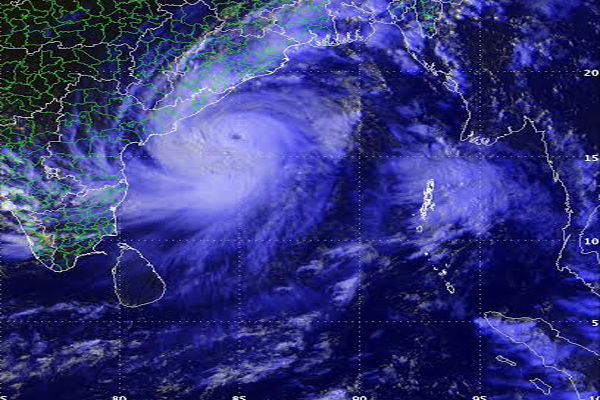 In the wake that cyclone ‘Hudhud’ is expected to slam the coastal parts of India, authorities have started large-scale evacuations in the coastal districts of Andhra Pradesh, the state that is suspected to bear most of the damage.  According to media reports, more than a lakh people have been evacuated till Saturday evening with the process still going on. The cyclone is expected to make landfall around Visakhapatnam in Andhra Pradesh on Sunday before noon, according to the Meteorological department.  ‘Hudhud’ has reportedly picked up speed from 120-130 kmph to 155-165 kmph by Saturday, is expected to make landfall in Andhra Pradesh on Sunday afternoon at a wind speed of 170-180 kmph, media quoted Meteorological department officials as saying. That means, Hudhud is going to be a "very severe category" cyclone. The three northern coastal districts of Visakhapatnam, Vizianagaram and Srikakulam in coastal AP are expected to be the worst hit.  Authorities in East and West Godavari districts - apprehensive that the cyclone could result in flooding - are drawing up a plan to tackle such an eventuality.  It has been learnt that nearly four and a half lakh people from 500 villages in the five coastal districts of Andhra Pradesh will be evacuated tillSaturday night and moved to local relief camps.  Fishermen have already been told to suspend fishing operations.  The East Coast Railway decided to cancel the services of 38 trains on the Bhubaneswar-Visakhapatnam route from 6 am on Sunday.  "We do not want even a single casualty," said a railway official, adding, "The entire section would be closed to all Mail, Express and Passenger trains".  On the other hand, evacuations have not started yet in Odisha, where 16 teams of the National Disaster Relief Force have been deployed. 300 temporary centres have also been set up while all local schools have been shut. Central agencies are geared up to meet any eventualities in Andhra Pradesh and Odisha in the wake of impending cyclonic storm ‘Hudhud’. 30 teams of the Indian Navy, along with teams of the NDRF and two columns of the Army have been kept on stand-by to help in relief and rescue operations in the state.  The Indian Air Force helicopters are also on standby to meet any emergent situation. The National Crisis Management Committee (NCMC) met again on Saturday under the Chairmanship of the Cabinet Secretary Shri Ajit Seth and reviewed the preparedness for relief and rescue operations in the wake of the cyclonic storm ‘Hudhud’ advancing towards the coastal areas of Andhra Pradesh and Odisha.  The Cabinet Secretary also took stock of the relief and rescue measures put in place in the Andhra Pradesh and Odisha after discussing the same with the Chief Secretaries of the States.  All the central agencies are fully geared up to provide necessary assistance to these States in case of any eventualities arising out of the landfall of the cyclone expected tomorrow.  A total of 39 NDRF teams comprising of more than 1680 rescuers along with 199 inflatable rubber boats and other life saving equipments are deployed in various parts of Andhra Pradesh and Odisha to meet any challenges arising due to cyclonic storm.  Prime Minister Narendra Modi is expected to hold a high-level meeting on Saturday evening to review preparedness for the approaching cyclone. Earlier, Home Minister Rajnath Singh has already discussed preparedness with the chief ministers of the two states and also that of Telangana and offered the Centre's help.  Odisha Chief Minister Naveen Patnaik has asked for additional satellite phones as the telecom network is expected to be affected when the cyclone hits the coast.