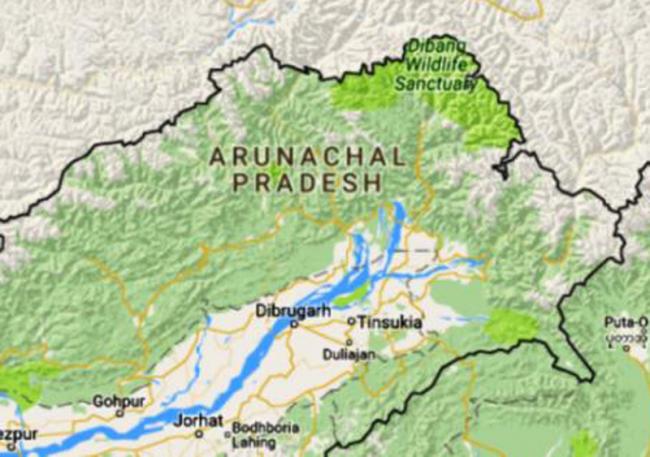 Itanagar, Oct 19 (IBNS): The Arunachal Pradesh government has issued an alert about a possible flash flood after a massive landslide on the upper stream of the Yarlung Tsangpo river in China which blocked the river flow.

East Siang district administration on Thursday issued an alert and said that the blockade caused by landslide on the Yarlung Tsangpo river, which is known as Siang and Brahmaputra in Arunachal Pradesh and Assam, is a likelihood of sudden flash flood in the downstream areas which may cause loss of life and properties.

The East Siang district administration has also cautioned and advised general people not to venture into Siang river or its banks and other periphery area for any activity and asked the people living in low lying areas to remain alert and urged not to panic.

The top official further said that water level of Siang river is in decreasing trends at Upper Siang, Yingkiong and recorded at 1.30 meter decreased from normal discharge at 9 am on October 17 that has impacted reduced water flow as per gauge reading station, Komlighat Pasighat as observed by the Arunachal Pradesh Disaster Management department on Thursday.

The order issued by the East Siang district administration stated, “In view of above situation the blockade caused by the landslide at yarlung Tsangpo river in Tibet area may burst out at any time causing sudden flash flood in the downstream areas and may cause loss of life and property as was happened in 2000. Therefore, in order to take preventive measures, the general public is hereby cautioned to refrain from venturing into Siang river or its periphery areas for collection of firwood, fishing, bathing etc to avoid any eventuality.

"And also people living in lowlying areas (both the Right and Left Bank of Siang River) viz. Jarku, Paglek, SS Mission, Jarkong, Banskota, Berung, Jampani, Sigar, Ralling, Borguli, Seram, Kongkul, Namsing, Mer, Gadum etc to remain alert but without panic for any eventuality that may happen due to above reasons."

On the other hand, Upper Siang district administration has also issued alert and asked Tuting Additional Deputy Commissioner, EACs of Geku, Jengging to set up control rooms in the respective offices and to monitor water at Tuting on hourly basis.

Meanwhile, Arunachal Pradesh’s Congress MP Ninong Ering wrote a letter to the External Affairs minister Sushma Swaraj and urged to intervene in the matter at the earliest as protect the land, water and precious lives of Arunachal Pradesh.

In his letter, Ering said that the Chinese is paying close attention to the blockage of the Yarlung Tsangpo river. If there is further information, they must notify us in time and the government must proactively engage with them on this issue.

“Chinese Ministry of Water Resources has said on regarding landslides blocking the river in the Milin section of the main stream of the Yarlung Tsangpo river also. China has said that, it will adopt the flood reporting channel as stipulated in the memorandum of understanding on flood reporting on the Yarlung Tsangpo-Brahmaputra river to inform the Indian side of the relevant news of China’s temporary monitoring downstream of the landslide,” Ering said in his letter.

It is to be mentioned that in June 2000, more than 100 people were died in Arunachal Pradesh and Assam following flash floods caused by similar conditions.