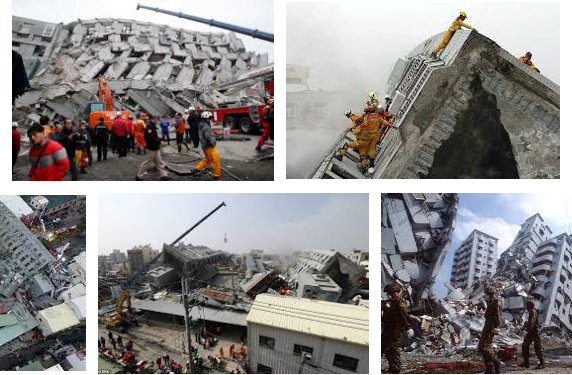 Hualien, Feb 7 (IBNS): At least two people were killed 219 others were injured as an earthquake measuring 6 on the Richter Scale hit  Taiwan's Hualien County  on Wednesday, media reports said.

After the magnitude 6.0 quake struck 18.3 kilometers northeast of Hualien County hall at a shallow depth of 10 kilometers, an intensity level of 7 was felt in Hualien County for a full 70 seconds, causing multiple buildings to collapse, trapping many inside as they slept. Of the 177 missing, 147 people are trapped in the 12-story  Yun Tsui residential complex which partially collapsed and titled 45 degrees, Taiwan News reported quoting Apple Daily report.

The first three floors of the  11-story Marshal Hotel  collapsed following the
quake.

Some people are still trapped inside the debris, reports said.

After the major 6.0 earthquake hit the area,  there have been 14 perceptible temblors and 104 smaller quakes for a total of 118 aftershocks so far.

According to reports, five buildings have collapsed in the area.

Rescue operation is still going on.

The injured people have been rushed to different hospitals across the area for treatment.