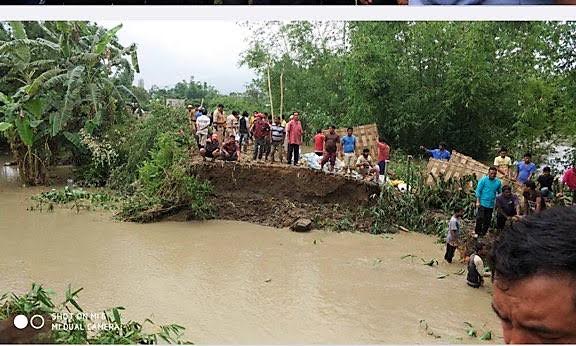 At least 21 persons were killed in flood and landslides in the state caused by incessant rains in past two weeks.

The Brahmaputra and several of its tributaries on Wednesday had inundated more areas as resulting nearly 4 lakh people of 15 districts were affected in current flood in the state.

According to the reports one person drowning at Khumtai area in Golaghat district on Wednesday and death toll rose to 21 in the current flood and landslides in the state.

The Assam State Disaster Management Authority (ASDMA) said that, around 3.95 lakh people of 853 villages in 15 districts are affected in the fresh flood.

On the other hand, the flood situation in Karimganj, Lakhimpur, Golaghat, Cachar and Sonitpur district remain unchanged as more areas were inundated by flood waters.

According to the ASDMA reports, over 41,500 people had took shelter at 160 relief camps in the flood affected districts.

The animals including one horned rhinoceros in KNP had crossed the NH-37 and took shelter at nearby Karbi hills.

An official of KNP said that, several areas of the national park were inundated by flood waters.

“We have taken all possible measures to protect wild animals of the park during the flood,” the forest official said.