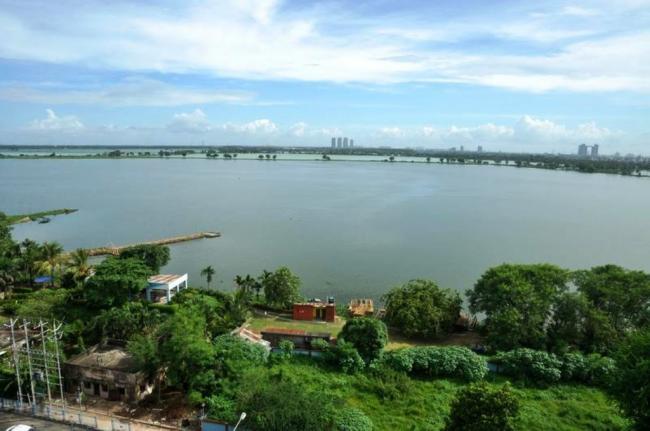 India Blooms News Service | | 08 Jun 2017, 10:56 am
#EastKolkataWetlands, #KolkataWetlands
Kolkata, June 8 (IBNS): At a workshop organised by IIT Kharagpur and Indiana University of Pennsylvania, experts said the East Kolkata Wetlands, a key component of Kolkataâ€™s waste-management resilience, are facing grave dangers with the government not doing enough to protect it.

“On World Water Day (22nd March), the East Kolkata Wetlands was declared as one amongst two most outstanding wetlands in the world for their ability to treat wastewater. However, most Calcuttans are not even aware of the fact”, said Dr. Dhrubajyoti Ghosh, Regional Chair for South-Asia Commission on Ecosystem Management, IUCN.

Other than being a natural cleanser of the city’s waste, the wetlands also provide several hundred tonnes of fish and vegetable produce of the city and provide employment to a large chunk of Kolkata’s population, said Ghosh, known for his crusade to save the water bodies for decades now.

Apart from this, some other non enumerable benefits of the EKW include flood control, carbon sequestration, air purification, open space and recreation, and maintaining a balance between ecology and economy.

Abutting Kolkata with a population of over 5 million in the core area itself, the 12,500 hectare space, which includes about 4,000 hectares of sewage-fed bheries (fisheries), has managed to survive the onslaught of Kolkata’s eastward urbanization. No more than one meter deep, this unique ecological zone’s sewage-fed aquaculture and garbage-fed horticulture provide the city with a natural waste recycling process not quite replicated anywhere else in the world.

Dr. Mahalaya Chatterjee of Centre for Urban Economic Studies  said: “My fascination with the East Calcutta wetlands (EKW) started with my father. Post 1980, when the Eastern Metropolitan Bypass was created, it was the beginning of the endangerment of the wetlands, as it became the playing field of real estate developers who plan to turn it into the next Chowringhee. Before this, the creation of Salt Lake in 1962-67 also reclaimed part of the wetlands."

Currently, the biggest threats to the EKW include urban encroachment, a weak administration, a severe lack of coordination among different nodal agencies and a uni directional planning of the city of Kolkata in expanding the sewage network without taking into account the carrying capacity of the East Kolkata Wetlands.

“The biggest threats in terms of land use are the conversion of agricultural, water bodies, open space and ecological land to settlement types of land use," said Chatterjee.

“Even the wastewater which serves as the natural food for the fishes, is changing in terms on its constituents, and now it contains large amounts of plastic, caustic wastes from soap industries, leather components etc., further adding to the endangerment”, she said.

“While it would be wrong to say that no steps have been taken so far, most of them are inadequate and not implemented properly even after the Calcutta High Court ruling in 1992 and an East Kolkata Conversation and Management body being set up in 2006”.

Talking about the reasons behind the grave issues concerning the wetlands, Chatterjee added,” There is also an extreme switch of vocations in the East Calcutta Wetlands which is cause for concern. An extreme shift from traditional fisheries, animal husbandries to modern businesses, salaried jobs and professional work has taken precedence.

The push factors for this are lower productivity in the fisheries, obstruction in water flow, over breeding of wastewater canals, and traditional vocations becoming less rewarding, experts said.

But at the same time, the pull factors include the Eastern Metropolitan Bypass proving to be a better connection to a secure Kolkata, increased options of modern vocations, better availability of modern education and formal training thus making the modern vocations a lot more attractive.”

If we lose the wetlands, it will cost the KMC and other municipal bodies around 4700 million rupees a year, a staggering amount by any standards.

“Largely, there is a huge coordination failure as while the eastern side of the Eastern Metropolitan Bypass is controlled by the Rural Development Authorities there is no coordination between them and the KMC. Other secondary bodies like KMDA, different NGOs, the irrigation and waterworks department who are supposed to keep the canals clean and unsilted are all too busy doing their own jobs to look into the matter”, concluded Chatterjee.

Tollywood actor and nature and wildlife enthusiast Sabyasachi Chakraborty also stressed on the importance of protecting and caring for our surroundings and the environment.