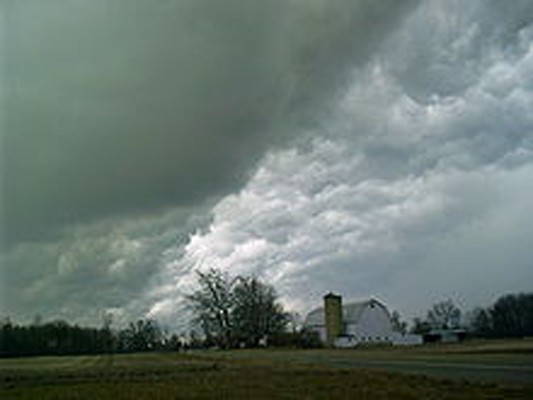 The World Meteorological Organization has announced for the highest reported historical death tolls from tropical cyclones, tornadoes, lightning and hailstorms.

It marks the first time the official WMO Archive of Weather and Climate Extremes has broadened its scope from temperature and weather records to address the impacts of specific events.

The findings were announced just ahead of two major conferences on improving multi-hazard early warning systems and strengthening disaster risk reduction, taking place in Cancun, Mexico from 22 to 26 May and organized by WMO and the UN Office on Disaster Risk Reduction.

"Extreme weather causes serious destruction and major loss of life. That is one of the reasons behind the WMO’s efforts to improve early warnings of multiple hazards and impact-based forecasting, and to learn lessons gleaned from historical disasters to prevent future ones,"  said WMO Secretary-General Petteri Taalas.

"The human aspect inherent in extreme events should never be lost,"  he said.

It did not, in this instance, address heat- or cold-waves, drought and floods.

It is hoped in the future to add more event impacts to the Archive of Weather and Climate Extremes.

This is maintained by the WMO Commission for Climatology which documents details of records for heat, cold, wind speed, rainfall and other events.

The committee’s findings were as follows:

Highest mortality associated with a tropical cyclone: an estimated 300,000 people killed directly as result of the passage of a tropical cyclone through Bangladesh (at time of incident, East Pakistan) of 12-13 November, 1970;

Highest mortality associated with a tornado: an estimated 1,300 people killed by the 26 April 1989 tornado that destroyed the Manikganj district, Bangladesh;

Highest mortality directly associated with a single lightning flash: 21 people killed by a single stroke of lightning in a hut in Manica Tribal Trust Lands in Zimbabwe (at the time of incident, Rhodesia) on 23 December 1975;

Highest mortality associated with a hailstorm: a severe hailstorm occurring near Moradabad, India, on 30 April, 1888, which killed 246 people with hailstones as large as “goose eggs and oranges and cricket balls”.

“One aspect of the ongoing discussion and exploration of climate change is the increased mortality threat of climate change on the planet’s human population. As world population continues to grow along with change in global climate, a greater portion of humanity is threatened by a multitude of climate and weather phenomena,” the expert committee wrote in an article published in the online edition of the American Meteorological Society’s journal, Weather, Climate and Society.

“However, vulnerability is a function of both the risk of an event and the adaptation or resilience to the event. For example, heatwave-related mortality tends to decrease as air conditioning becomes more widespread. Similarly, lightning casualties decrease when munitions storage facilities install lightning rods and athletic programs establish lightning safety protocols,” the experts wrote.

Overall mortality can also decrease as a result of continuous improvement in related forecasting and warning infrastructure. For example, the MeteoAlarm system in Europe is a web-based service designed to provide real-time warning for people travelling in Europe of severe weather.

“Yet even with these improvements, mortality from weather-related events will continue. In order to put potential future weather-related catastrophes into accurate historical context, it is useful to have knowledge of baseline changes in weather-related mortality as monitored over the last one hundred and fifty years of official international weather records,” said the WMO committee.

The diverse international 19-member panel consisted of climatologists and meteorologists, as well as a physician and a weather historian. It only considered mortality extremes after 1873, the formation date of the WMO’s predecessor, the Interrnational Meteorological Organization, in order to ensure the quality of the available meteorological data, even though events with high mortality rates occurred before that date. The panel undertook to obtain direct documentation of each event and establish the best specific death toll associated with each event.

The panel chose carefully selected events in order to establish procedures and guidelines for potential future evaluations of other events such as heat-waves or floods.

“These events highlight the deadly tragedies associated with different types of weather. Detailed knowledge of these historical extremes confirms our continuing responsibilities to not only forecast and monitor weather and climate but to utilize that information to save lives around the world so disasters of these types are lessened or even eliminated in the future,” said Randall Cerveny, WMO Rapporteur on Climate and Weather Extremes.

As always with WMO weather extremes evaluations, future reassessments may be undertaken if there is any new evidence.

"Validation of these new world mortality extremes provides solid documentation for many of these deadly events that have not been rigorously compiled in the past; reinforcement to the knowledge that certain types of weather can be very deadly, and base values for comparsion of potential future weather-related tragedies," said Thomas Peterson, president of the WMO Commission for Climatology.

WMO is strengthening collaboration with UN partners to help improve knowledge on the humanitarian and environmental impact of extreme weather and climate events and has started factoring this information into its reports on the state of the climate.

Details of the extreme events

The claimant for “highest mortality associated with a tropical cyclone” occurred in Bangladesh (at time of incident, East Pakistan) on 12-13 November, 1970. This notorious tropical cyclone is sometimes referred to as the ‘Great Bhola Cyclone’ with an estimated 300,000 (low end) to 500,000 (high end) storm-related fatalities (mostly the result of a large storm surge overwhelming the islands and tidal flats along the shores of the Bay of Bengal). As with any disaster of this magnitude, exaggerated death tolls are frequently common and official values difficult to obtain, but the committee agreed that the low-end estimate was more accurately documented.

The tornado that destroyed the Manikganj district, Bangladesh, occurred on 26 April 1989, destroying two towns and leaving about 80,000 people homeless. This violent storm, with a track of about a mile wide, injured over 12,000 and purportedly killed a large number of people. The committee concluded that a death toll of 1,300 individuals was the most reliable estimate.

Very severe thunderstorms over Dronka, Egypt, on 2 November 1994 caused much damage and flash flooding. A flash of lightning ignited three oil storage tanks each holding about 5,000 tons of aircraft or diesel fuel. These tanks were located on a railway line that subsequently collapsed as floodwaters built up behind it. The fuel caught fire from the lightning strike and the floodwaters swept the blazing fuel into the village. An official document from the Egyptian Ministry of Health and said that hospitals in the region had received 469 bodies.

The highest death toll resulting directly from the effects of the lightning itself was determined to be a lightning flash that killed 21 people in a hut in Manica Tribal Trust Lands in eastern Rhodesia [now Zimbabwe] on 23 December 1975. Nearly 90% of sub-Saharan buildings, especially homes, are not lightning safe, leaving entire families, classrooms, and workers constantly vulnerable. In particular, schools and homes tend to be mud-brick with thatch or sheet metal roofs held down by rocks.

The hailstorm occurring near Moradabad, India, on 30 April, 1888, is said to have killed as many as 246 people with hailstones as large as ‘goose eggs and oranges and cricket balls’. An eye witness report from a meteorologist said house roofs fell in, doors and windows broke, and verandas were blown away. “Men caught in the open and without shelter were simply pounded to death by the hail. Fourteen bodies were found in the race-course. More than one marriage party were caught by the storm near the banks of the river, and were annihilated. The police report that 1,600 head of cattle, sheep, and goats were killed,” wrote John Eliot, who was to become the first director-general of the India Meteorological Department.