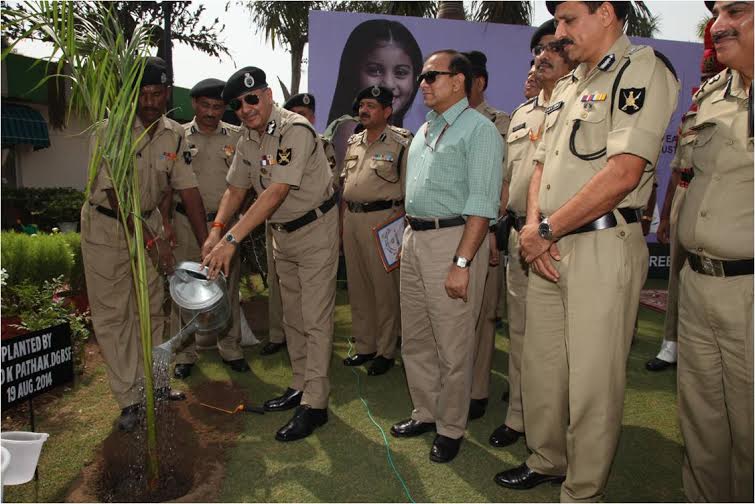 In a stupendous achievement, around 2 lakh saplings were planted within  30 minutes at all Frontiers Headquarters, Sector Headquarters, Training Institutions, Battalion Headquarters and all Border Outposts, which is a record as per LIMCA Book of Record. It is for the first time in the history of Central Para Military Forces of India, that any CAPF has achieved the feat of  planting , around 2 lakh saplings in half an hour   time. In Delhi & NCR, around 7100 Saplings have been planted during this campaign which includes Fruit plants, Shadow Plants & Ornamental Plants.   Border Security Force undertakes awareness programme each year to promote the preserving of biodiversity and other issues of impact, related to environment. In order to meet the challenges posed due to global warming and to bring environment awareness among the BSF troops, a special programme was organized by the BSF at all Headquarters and Border Outposts during the day. At BSF Chhawla Campus in New Delhi, the plantation programme was graced by  D K Pathak, IPS, Director General Border Security Force by planting a sapling. Pathak  stressed on the importance of planting trees and said that trees help in maintaining the ecological balance. He further said that trees should be treated like a child and due care should be taken for their growth and development, which will surely benefit the coming generations and environment in general.  Pathak  congratulated all the Officers, Sub-Ordinate Officer and other Ranks of the BSF for this grand success.      During the campaign, representatives of Limca book were also present at different location of BSF HQrs and witnessed the plantation.