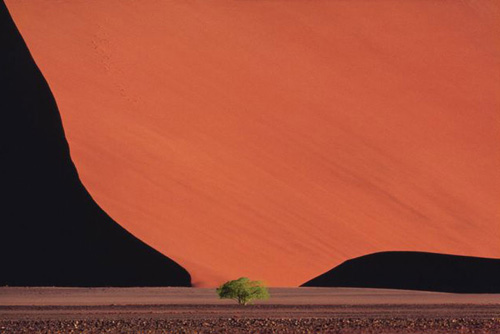 “Land degradation, caused or exacerbated by climate change, is not only a danger to livelihoods, but also a threat to peace and stability,” Secretary-General Ban Ki-moon said in his message for the World Day, observed annually on 17 June.

He noted that recovering land that is degrading will have multiple benefits. “We can avert the worst effects of climate change, produce more food and ease competition over resources. We can preserve vital ecosystem services, such as water retention, which protects us from floods or droughts.

“And a comprehensive and large-scale approach to land recovery can create new jobs,business opportunities and livelihoods, allowing populations to not only survive, but thrive,” he stated.

The theme of this year’s World Day is “Land belongs to the future, let’s climate-proof it.” Studies show that 24 billion tons of fertile soil are being eroded each year, and 2 billion hectares of degraded land have potential for recovery and restoration.

As Member States continue efforts to elaborate a global development agenda beyond the MillenniumDevelopment Goals deadline of 2015, General Assembly President John Ashe encouraged them to work together to mitigate patterns of desertification in order to meet the daily needs of the world’s inhabitants, especially to produce food.

“Climate change can profoundly alter the relationship between water and the land. The amount and quality of the land we have today will be very different from what we will have in the future,” he said in his message.

Mr. Ashe also stressed that a “land-degradation neutral world” should be a global norm. “Let us, the global community pursue it relentlessly, because each flood, drought, landslide, tornado, heat wave or coastal submersion robs us of an invaluable natural asset – productive land.”

Monique Barbut, Executive Secretary of the UN Convention to Combat Desertification (UNCCD), said that climate change is changing the dynamic between water and the land.

“Our focus on the future impacts of climate change has blinded us to the crucial fact that the status of the land is already changing… Soil formation takes many years, but just one flood can sweep it all away,” she stated.

The UNCCD is holding a global observance today at the World Bank headquarters in Washington D.C. with high-level participation, where the winners of the Land for Life Award, for excellence in sustainable landmanagement, will be announced.

Many countries are also holding national events to mark the World Day, while several will name their Dryland Champions, local heroes who have made a significant practical contribution to sustainable land management.