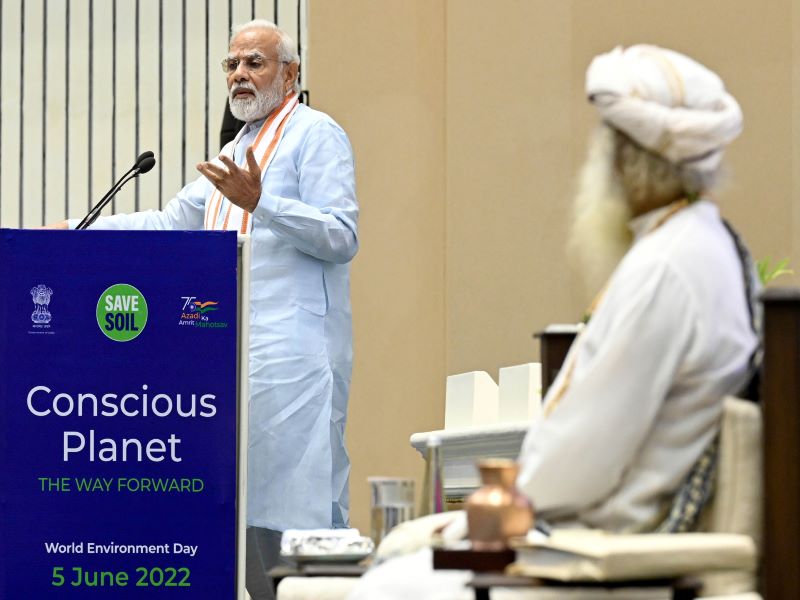 New Delhi: Prime Minister Narendra Modi on Sunday announced that India has achieved the target of 10 percent ethanol blending in petrol five months ahead of the target date.

He was addressing a programme on 'Save Soil Movement' with Sadhguru Jaggi Vasudeva and top Union Ministers on the occasion of World Environment Day here at Vigyan Bhawan.

"On World Environment Day today, India has achieved the target of 10 percent ethanol blending in petrol. You will also feel proud to know that India has reached this goal 5 months ahead of schedule. How big this achievement you can guess from the fact that in the year 2014, only 1.5 percent of ethanol was blended into petrol in India," he said.

"By reaching this goal, India has got three direct benefits. The first is that about 27 lakh tonnes of carbon emissions have been reduced. Second, India has saved foreign exchange of more than 41,000 crore rupees. And the third important benefit is that the farmers of the country have earned an income of Rs 40,600 crore in 8 years due to the increase in ethanol blending," he added.

The Prime Minister congratulated the people, the farmers and the oil companies for the achievement.

The Prime Minister said India's role in climate change is negligible but India is working on a long term vision in collaboration with the International community on protecting the environment. He said that developed nations were responsible for the largest carbon emissions.

"The big modern countries of the world are not only exploiting more and more resources of the earth but the highest carbon emission also goes on their account," he said.

He said in the last eight years the government has started multiple initiatives that are aimed at tackling climate change.

"Today when India is celebrating Azadi ka Amrit Mahotsav, initiatives like Swachh Bharat Mission, Save Soil Movement or Namami Gange Conversation, will play an important role in protecting the environment," he said.

He said the government has focussed on five things in the last eight years to save the soil- Promoting chemical free soil, saving soil organic matter, improving water levels in soil, tackling reduction in ground water and tackling soil damage due to reduction in forests.

"Soil Health Cards are playing an important role in changing the mindset of our farmers. These cards provide farmers with the nutrient status of their soil and its composition. This is helping them decide what is needed for good soil health," he said.

The Prime Minister said India's biodiversity and wildlife policies have resulted in a record increase in the wildlife population. Be it tiger, lion, leopard, or elephant, their numbers are increasing in the country, he said.

In March, we began the rejuvenation project of 13 rivers. This project will also help in increasing the forest cover by over 7,400 sq km, he said.

In this year's budget, the government has announced measures to encourage natural farming in the villages situated on the banks of Ganga.

"You might have heard of Defence Corridor, Infrastructure Corridor, but we are now building a Natural Farming Corridor - to encourage chemical free natural farming on the banks of river Ganga. It will not only make our farms chemical free and also give new strength to Namami Gange campaign," he added.

The Prime Minister said the speed at which India is taking initiatives to save the environment, a large number of Green Jobs are being created in the country.

The Prime Minister said he will unveil more later in the evening on the government's plan to construct Amrit Sarovars across the country.

They will not only provide water security to coming generations but also aid our biodiversity, he added.

Save Soil Movement is a global movement to increase awareness about deteriorating soil health and bring about a conscious response to improve it.

The movement was started by Sadhguru in March 2022, who embarked on a 100 day motorcycle journey passing through 27 countries. June 5 marks the 75th day of the 100 day journey.

The movement is aimed at addressing the soil crisis by bringing together people from around the world to stand up for Soil Health, and supporting leaders of all nations to institute national policies and actions toward increasing the organic content in cultivable Soil.