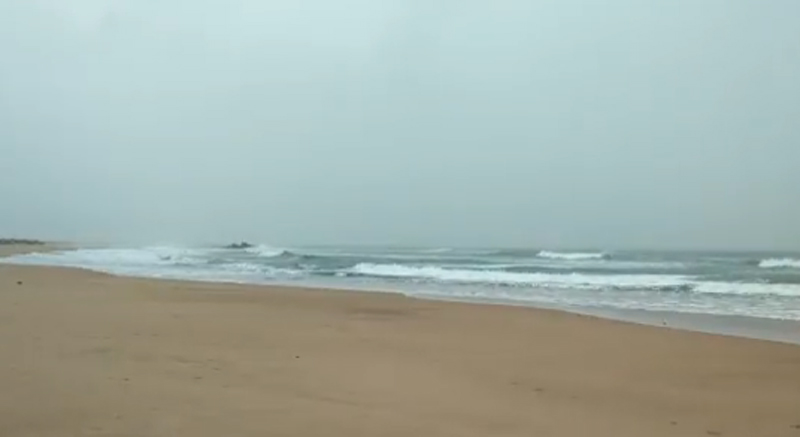 Odisha Special Relief Commissioner P K Jena quoting Meteorological reports told UNI the landfall process has already started and will continue for around three hours and would be completed at 2100hrs to 2130hrs.

He said the landfall process started earlier than the predicted time as the the cyclonic storm moved nearly westwards with a speed of 24 KMPH during the past six hours. Earlier, it was moving at a speed of 17 KMPH.

The system , he said, is likely to cross north Andhra Pradesh- South Odisha coasts between Kalingapatnum and Gopalpur about 25 KM to the north of Kalingapatnum as a cyclonic storm with maximum sustained wind speed of 75-85 KMPH gusting to 95 KMPH.

The cyclonic storm is expected to cross Odisha in the forenoon on Monday.

Under its impact light to moderate rainfall at most places with heavy to very heavy rainfall is likely to occur at isolated places in several districts of the state.

Seven districts — Gajapati, Ganjam, Rayagada,Kandhamal, Nawarangpur, Koraput and Malkangiri- are likely to experience heavy to very heavy rainfall but Gajapati and Ganjam are likely to be affected the most.

Jena said the district collectors of these districts are asked to monitor the situation and keep a vigil on the flash flood and landslides likely to occur in these districts.

Under its impact , he said Gajapati district is witnessing light to moderate rain.

He said so far, 16,000 people, including 600 pregnant women, old citizens and Divyangs, have been evacuated from low-lying and those areas prone to landslide.

Odisha is experiencing the second cyclone this year after Cyclone Yaas hit the state in May.

Discussed the cyclone situation in parts of Odisha with CM @Naveen_Odisha Ji. The Centre assures all possible support in overcoming this adversity. Praying for the safety and well-being of everybody.

Spoke to Andhra Pradesh CM Shri @ysjagan and took stock of the situation arising in the wake of Cyclone Gulab. Assured all possible support from the Centre. I pray for everyone’s safety and well-being.