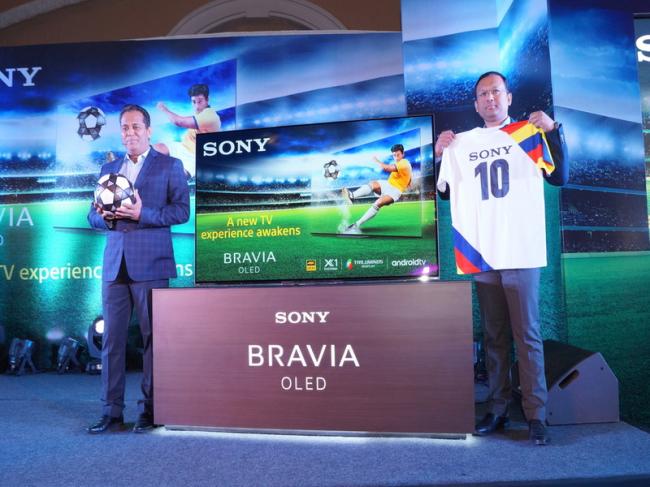 Kolkata, May 29 (IBNS): With the FIFA World Cup just round the corner, Sony launches it's all new Bravia OLED A8F at the Oberoi Grand in Kolkata, with hopes of increasing sales by 50%.

Sony wants to cash on to the football crazy market of North East India and West Bengal that contributes to the bulk of national viewership for this purpose.

An eight-crore rupees campaign has been designed in this regard that will run through all forms of media especially in Eastern India during the football season.

In the words of Satish Padmanabhan (Sales head, Sony India), "we are looking to sell 80,000 TV sets during this span and from this region we can surely expect to achieve our target."

The new OLED A8F, that will be the face of their campaign is packed with features like 4K HDR image processor XI Extreme together with Sony's unique Acoustic Surface that will make TV viewing more exciting.

To attract customers Sony is offering an Adidas football with the Bravia A8F and other 40inch variants while those opting for 32inch will get a sporty T-Shirt.

When asked about the uniqueness of the product Satish Padmanabhan told IBNS, "Our new TV comes with the Acoustic Surface Technology that is yet to be heard of."

He added, "It is something that will let you hear the sound of moving objects as they move."

Apart from this, there is a noted technology shift in Sony's present Android Television series, making them more user friendly by offering interaction facility whereby viewers can get lights to be dimmed and order Pizzas all through their Television sets.

IBNS also enquired about the market's preferences to which Padmanabhan replied," Eastern Indian market has expanded beyond expectation and people are giving value to our services which means they are spending."

Sony will run their campaign throughout the time FIFA World Cup is on and this is the first time they are planning to run parallel campaigns.