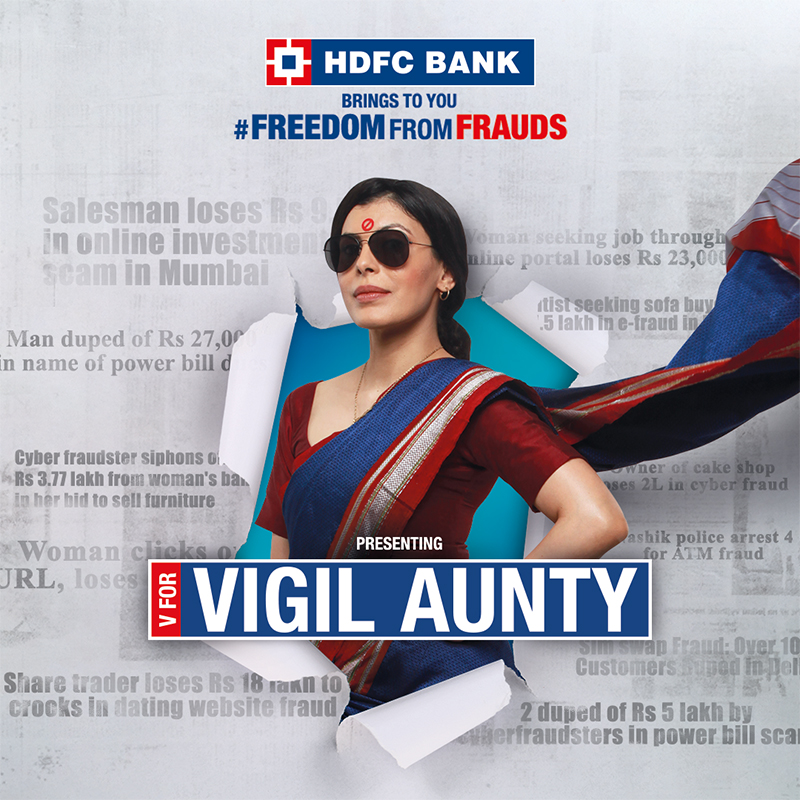 Mumbai: HDFC Bank today announced that the Bank will celebrate 75 years of India's independence by launching a new campaign, 'Vigil Aunty', which will encourage people across the country to practise safe banking habits.

This will complement the Bank's popular 'Mooh Band Rakho' campaign which urges people not to share their confidential banking information with others.

Anuradha (Anu) Menon, who popularised the Lola Kutty character, will be the protagonist of this campaign. Through a series of videos, reels, chat shows, Menon, as Vigil Aunty, will be creating awareness on safe banking do's and don'ts.

Vigil Aunty will motivate citizens to stay vigilant by keeping them informed about the modus operandi of financial fraudsters, ways to detect cyber fraud attempts and how to stay safe. She will host chat shows on social media platforms and discuss some of the recent incidents of cyber frauds with celebrity guests.

Vigil Aunty will be a social media influencer with a presence on Instagram and Facebook. She will also have her own WhatsApp number (+91 72900 30000) to connect with customers. HDFC Bank's website will have a dedicated page that will create awareness on cyber frauds.

Commenting on the launch of this campaign, sameer Ratolikar, Chief Information Security Officer, HDFC Bank, said: "Fraudsters are increasingly adopting social engineering tactics to steal money from customers' bank accounts. On the pretext of offering certain services or promising help, the fraudsters are luring customers into sharing their PINs, OTPs, passwords, and other confidential banking information with them. Hence, there is a need to educate customers on safe banking habits and make them aware of the various modus operandi used by fraudsters. At HDFC Bank, we recognise our role in creating this awareness."

"In the online world, customers are increasingly engaging with social media influencers and content creators to seek information and guidance on a wide variety of topics, ranging from food to travel to entertainment. Hence, we decided to create our very own social media influencer, Vigil Aunty, to provide customers with information on safe banking habits. Anu Menon fitted the role perfectly as she is highly effective in engaging with people; her comic actions with her command over several languages leads us to believe that she will be able to inspire people across the country in adopting safe banking habits. We decided to mark the 75th year of India's independence through a campaign that will promote freedom from fraud by spreading awareness on the topic," Ravi Santhanam, Chief Marketing Officer and Head – Corporate Communications, Liability Products and Managed Programmes, HDFC Bank said.

The campaign will run for four to six weeks to popularise Vigil Aunty and encourage people to follow her on social media and/or through WhatsApp. However, as a social media influencer Vigil Aunty will have a continuous presence in the digital ecosystem and will continue to inform customers about various modus operandi of financial fraudsters and how to stay safe from them.