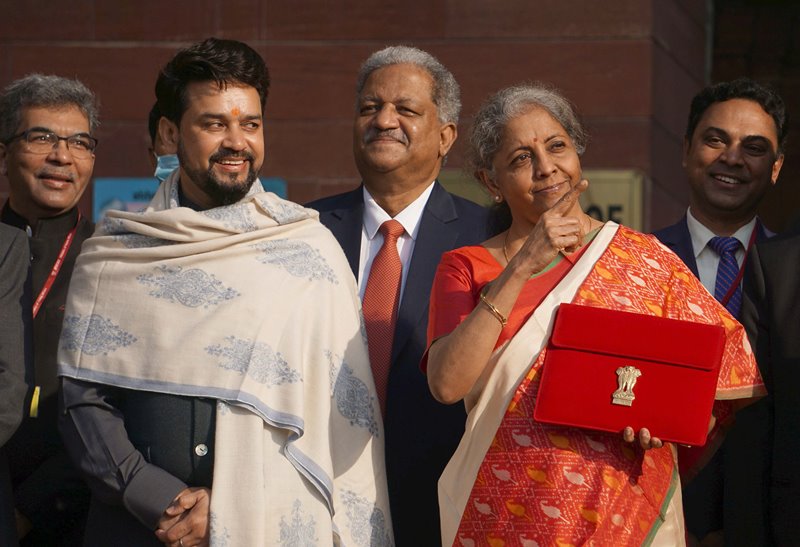 She will present the budget in the Parliament at 11 am.

Smt Nirmala Sitharaman, Minister of Finance along with Ministers of State for Finance, Dr Bhagwat Kishanrao Karad, Shri Pankaj Chaudhary, and senior officials of the Ministry of Finance, called on President Ram Nath Kovind before presenting the Union Budget 2022-23. pic.twitter.com/5xc3sfwyWr

The budget will be presented just days ahead of the Assembly polls to be held in several Indian states, including in Punjab and Uttar Pradesh.

India forecast an economic growth of 8 to 8.5 percent in the coming fiscal year that starts in April, as per the Economic Survey 2022 tabled in the Lok Sabha by Union Finance Minister Nirmala Sitharaman on Monday.

The projected figure is down from the estimated 9.2 percent growth in the current fiscal year.

A day ahead of the Union Budget, Finance Minister Nirmala Sitharaman presented the Survey which contains an in-depth analysis of the Indian economy, challenges faced by it, sectoral trends, statistics and growth projection.

The Survey said that growth in 2022-23 will be supported by widespread vaccine coverage, gains from supply-side reforms and easing of regulations, robust export growth, and availability of fiscal space to ramp up capital spending.

"The year ahead is also well poised for a pick-up in private sector investment with the financial system in a good position to provide support to the revival of the economy. Thus, India's GDP is projected to grow in real terms by 8.0-8.5 per cent in 2022-23," the Survey said.

The Gross Domestic Product or GDP is the broadest measure of value of all goods and services produced in the country.