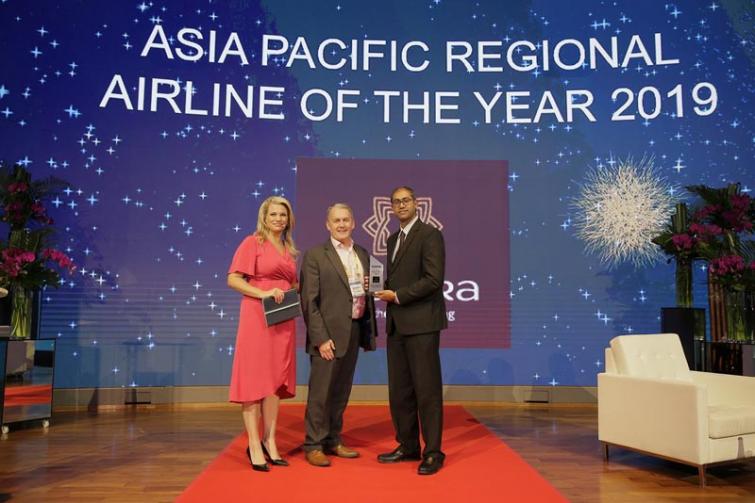 New Delhi/IBNS: Vistara, India’s finest full-service carrier and a joint-venture of Tata Sons and Singapore Airlines, has been named the ‘Regional Airline of the Year’ at CAPA’s 16th annual Asia Pacific Aviation Awards for Excellence held recently at the ongoing CAPA Asia Aviation Summit in Singapore.

CAPA awards this title to an airline that has been the biggest standout strategically, has established itself as a leader and demonstrated innovation in the regional aviation sector.

Vistara was selected for its substantial achievement and consistent growth in a highly competitive domestic market largely dominated by LCCs.

Vistara's traffic grew by 30% in 2018 to more than five million passengers and its seat count is up by 40% in 2019. In the current financial year, Vistara has already grown its fleet and network by nearly 50% each and flown 4.5 million passengers in the last seven months.

Leslie Thng, Chief Executive Officer, Vistara, said: “Our vision is to establish Vistara as a global full service airline that India will be proud of. This recognition by CAPA reaffirms our confidence in realising this vision as we broaden our horizons and prepare to launch medium and long-haul international operations while bolstering our presence in India. Our effort continues to be to innovate and stay relevant in the dynamic aviation industry, to maintain the highest standards of operations and to focus on delivering consistent, world-class service to customers.”

Regarded as the pre-eminent awards for strategic excellence in aviation, CAPA first established the awards in 2003, to recognise successful airlines and airports within the Asia Pacific region.

Peter Harbison, Chairman Emeritus, CAPA, said: “Vistara’s growth from start up in 2015 to become India's sixth largest airline by seats in 2019 demonstrates that there is still a place for a well executed full service business model in a market where LCCs have more than three quarters of domestic seats and approaching one third of international seats. Vistara’s recent move into international operations promises to add a new dimension to the India market.”