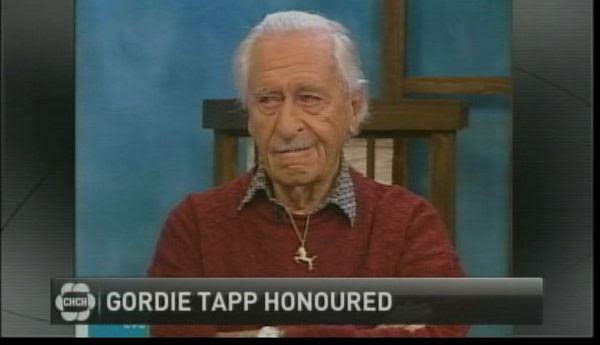 Born in 1922 in London, Ont., Tapp was often described as the "world's finest storyteller."

Tapp ventured into radio before moving into the television medium.

He lived in LaSalle retirement home in Burlington Ont., with his wife Helen, and was still performing up to weeks before he died.

Gordie is survived by his wife Helen, and his three children, Jeoff, Kate and Joan.

During the 1950s, he was a founding member of “Main Street Jamboree,” a radio and TV show out of Hamilton.

The music-variety program “Country Hoedown,” in which Tapp showcased his well-known character Cousin Clem, ran from 1956 to 1965 on CBC.

His 1980 album, ‘Both Sides’, featured both his comedic and singing talents.

In 2007, Gordie released his autobiography, ‘What's On Tapp’.

Comedian Colin Mochrie Mochrie had once told Tapp that his career was inspired in part by “Hee Haw.”

“For me, it was the first show where I realized that Canadians could make it big in America,” Mochrie said. “It was sort of an inspiration.”

Tapp was also involved in raising funds for the Muscular Dystrophy Association and the Easter Seals Society.