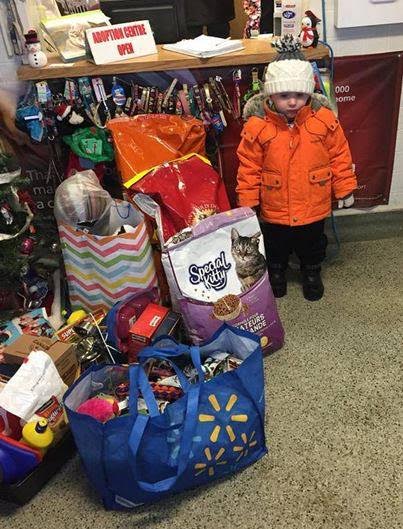 “It wasn’t the plan from the beginning but then once it kind of blew up on social media we thought that it would be a good plan if we could kind of turn this into some good,” White said.

White said Bentley was able to raise about $260 on Halloween night from neighbours.

The family then turned to social media and relatives and were able to reach their goal of $500.

“Part of what makes us proud about the whole thing is that he gets that he was collecting money to help Gord,” she said.

“He said, ‘Gord’s not feeling well in the hospital and he needs money to make people feel better.’ So he’s understanding a little bit, as much as he can with only being almost three years old.”

Bentley dressed up as The Tragically Hip frontman for Halloween once more before delivering the cheque on Monday.

“We told him that he was going to put on his Halloween costume again,” White said. “I think he was more excited about that.”

On his third birthday instead of collecting presents for himself Bentley collected donations for homeless animals.