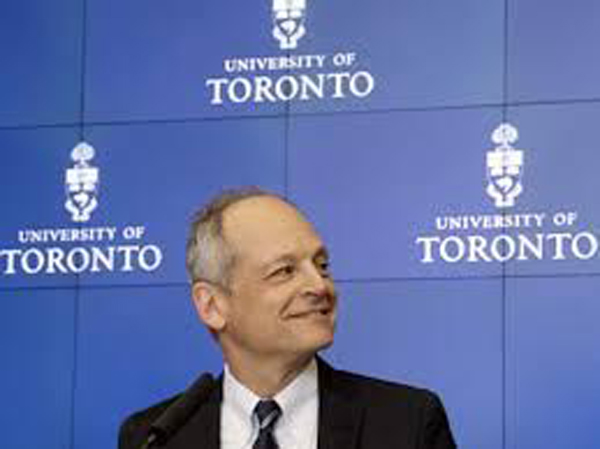 The total fundraising amount of more than $2-billion was received from 94,736 individual donations.

The success of the present fundraising campaign can be traced back to 1990s, U of T president Meric Gertler said.

Since 1990s, Gertler said U o T was able to collect one billion dollars in fundraising campaigns under the former U of T president, Robert Prichard.

Gertler was appointed as its 16th president in 2013.

When asked by Star.com how he planned to tackle the bleak financial situation of U of T., Gerter had replied, “It is a challenging time for universities, not just in Ontario but around the world… and they’ve been facing very hard times with the global economic downturn. It’s not unique to U of T…. it means that we have had to be creative in making ends meet. So private fundraising has been a big part of the story. I will be fully engaged in that.”

Ever since then he had been working hard to make fundraising campaigns a great success.

The present campaign which had surpassed all the previous limits had been an eye-opener for the students who were motivated by its endless limits.

But according to media U of T fundraising campaigns have a long way to go to compete with American Postsecondary institutions like the University of Southern California (USC), Berkeley who had been launching multi-billion-dollar campaigns.

For example, Larry Ellison, the founder and chairman of Oracle Corp.  and a reputable philanthropist had given a gift of $200 million -- one of the largest gifts made in recent years to cancer research and treatment -- to set up the Lawrence J. Ellison Institute for Transformative Medicine of USC in west Los Angeles in which interdisciplinary research would be combined with holistic prevention and treatment of cancer.

USC Trustee Marc Benioff ’86 and his wife, Lynne, had supported construction of the Lawrence J. Ellison Institute by their $20 million gift.

Harrlan Martens ’70, JD ’74 and his wife, Linda ’69, have promised $15 million to support scholarships and fellowships at the USC Dornsife College of Letters, Arts and Sciences.

Their donation will launch the Martens Scholars Program, which will help top students come to USC and support current and future generations of students.

“This exceptionally generous gift from Harlan and Linda Martens will directly benefit our students, as it invests in their extraordinary potential and provides life-changing opportunities that will remain with them throughout their lives,” said USC President C. L. Max Nikias. “This program also builds on the legacy of steadfast support that the Martenses have shown for their alma mater over the years. We are so grateful for their philanthropic leadership.”

Gertler said that the high success of American postsecondary institutions fundraising campaigns is due to inculcation of the importance of philanthropy into the very personalities of students at the very early stage of their education.

A strong relationship had been built between the students and the faculty which resulted in the success of their campaigns. The students were taught they repay to the institution the very standards of education they had received.

In the light of Ontario Government’s budgetary constraints to fund educational institutions in Ontario, the U of T relies largely on outside monetary resources in the form of donations and fundraising campaigns, said Gertler.

The Scholarships of the students and their research work which was earlier funded by the government are now covered by the amounts collected by these campaigns.

“Fundraising has now become an essential part of the business of universities,” Gerter said. “Pretty much every university has to engage in this kind of activity to some extent.”

The U of T’s general plan in utilising additional $400-million is to fund the students going abroad for studies and for international students coming to the university. But Gertler said that the final decision would be made after consulting with the faculty in deciding the services and programs needed by the university.

Any amount the U of T receives in the form of donation or funds is 100 percent tax free. Mr. Gertler and David Palmer, vice-president (advancement), who oversee the university’s fundraising programs said that an of average of 16.7 cents per dollar is used for overhead costs such as rent or marketing.

Mr. Palmer added that people make donations based on the relationship the school has built with them.

“Major gifts are not a one-act play,” he said.

Every effort was made to put donors in direct contact with researchers, students and departments who are being supported by the gifts.

“People give, first and foremost, to create change”, said Palmer.

Speaking at an event on December 8, at U of T, Gertler thanked donors for their and commitment generosity and said,  “Great universities are built by great people. The excellence of our faculty and students, and the extraordinary passion and dedication of our supporters is fuelling our imagination, driving our discoveries and laying the groundwork for the future success of the University. With our expanded campaign goal, we have an opportunity to raise U of T to even greater heights of research excellence and accessible education.”

“As Boundless progressed, we identified Three Priorities for the University, to help us achieve our strategic plan. First, we are leveraging our three locations in one of the world’s most vibrant…city-regions…Second, we are strengthening our partnerships with leading peer institutions around the world… And third, we are re-imagining undergraduate education…to help them prepare for a lifetime of fulfillment and success,” concluded Gertler.