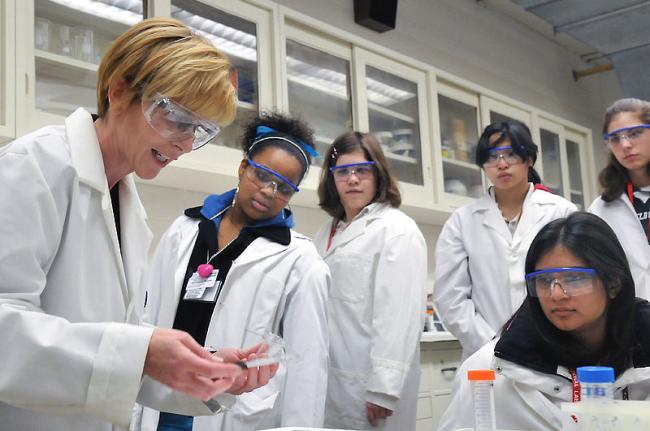 The international programme of OECD measures the performance of 15-year-old high school students in Science, Maths and reading, every three years. Canada bagged the overall fourth position in Science, in a tie with Finland, and behind Singapore, Japan and Estonia.

The education evaluation of 72 countries, released on Tuesday, revealed Canadian students’ strong grasp of science literacy. But experts say educators and governments should strive that students apply this interest to their careers.

“There’s a greater awareness of the importance of science in the country’s future,” said Bonnie Schmidt, president of Let’s Talk Science, a non-profit organization that promotes learning in STEM subjects (science, technology, engineering and mathematics).

“Collectively as a country, we have to do a better job of showing where the opportunities are, helping young people and parents connect the dots to what they’re learning in school and what it means for future work and citizenship opportunities.”

Test results also revealed that Canada’s performance had not changed much since 2006, when the country had ranked third.

Experts said The Council of Ministers of Education, Canada (CMEC) should probe into the present lack of improvement.

“Provinces and territories take these tests very, very seriously,” said Doug Currie, Prince Edward Island’s Minister of Education and CMEC chair, in a talk with the Globe and Mail. “Canada continues to prove and to back up that we’re certainly a global leader.”

The test scores of students had not changed much in all the provinces, excepting Newfoundland and Labrador, Manitoba and Saskatchewan, where the average score dropped by about 20 points.

The study pointed out that among 20,000 Canadian students who wrote the two-hour computer-based assessment in April and May, 2015 boys and girls did not differ in their achievement of scores.

Science scores of 2015 PISA test came three years after Canada dropped out of the top 10 in international math education rankings.

This fact had kindled a debate about how the subject was being taught in schools.

Parents had been appealing to Education ministries to lay more stress on repetition and exercises before problem-solving in teaching math.

Math, as well as reading, were tested in the latest PISA results. But there were fewer questions asked and a smaller proportion of students participated.

Performance of students in Quebec and British Columbia was above the Canadian average.

Anna Stokke, a professor in the department of math and statistics at the University of Winnipeg and one who was responsible for change in math, said although the results in science were encouraging, it was troubling to see students continue to struggle in math in many provinces.

Prof. Stokke pointed out that Math is a cumulative subject and students needed to have the necessary background to learn new concepts.

Students in PEI showed improvements from previous years. Six years back the province had no standardized testing but overtime it introduced rigorous tests at Grades 3, 6 and 9.

“The PEI government seems to take feedback and data seriously and uses that data towards improving outcomes for students,” Prof. Stokke said in an interview with the Globe and Mail.

Saskatchewan ranked at the bottom among provinces, and even performed below the OECD average.

Saskatchewan had “ignored” parents and held onto its curriculum, Prof. Stokke said.

She added: “It is extremely important that steps be taken to reverse the decline so that our children have access to a wide range of careers and the skills required to participate internationally.”