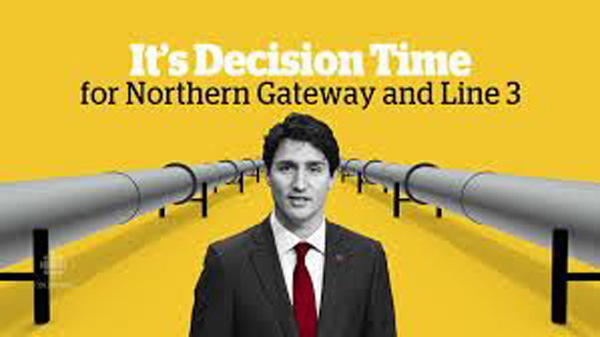 However, Enbridge's Northern Gateway Pipeline project was rejected and the ban imposed on the movements of oil tankers along the northern coast of British Columbia to continue.

The decision is likely to have a political fall out in the future. It has already provoked outrage among First Nations Politicians of B.C's lower mainland, media reported.

Justin Trudeau, at a press conference in Ottawa, announced his government's consent to increase capacity to three times of Trans Mountain Pipline of Kinder Morgan and Enbridge's extension of pipeline to Wisconsin for an added export of one million barrels a day from Alberta Oil sands.

Approving the above two projects and rejecting Enbridge's Northern Gateway Pipe line through Great Bear Rain forest and suspension of crude tanker movement off B.C's northern coast, Justin Trudeau said, "We made the decision today because we are convinced that it is in the best interests of all Canadians."

This decision seemed inevitable as he had pledged to the nation that he would  navigate Canadians towards a way out, where Canadians could try to acquire market share on the international oil market out of continent.

By doing so, he had effectively made it the center of an ambitious political bargain -  a pipeline matched with climate change plan.

But in doing so Trudeau risked his popularity to the extent where he could lose several  of his party seats and a sizeable number of voters who had elected Liberals in the last election in as many as 15 seats in lower mainland British Columbia.

Federal NDP leader Tom Mulcair called it a 'betrayal' and more vociferous protests and accusations are likely to pop-up questioning his promises of environmental stewardship.

It's an irony that when Federal NDP leader Tom Mulcair vehemently opposed the approval, this contentious decision gave a breather to provincial NDP leader and Premier of Alberta, Rachael Notley.

It gave Rachael Notley the biggest victory in her brief tenure of Premiership of Alberta.

Expressing her gratitude to Prime Minister Trudeau for his approval to the pipeline projects, Notley said, "The Prime Minister has shown extraordinary leadership today. Our province has been brutally slammed by the collapse of commodity prices and it has been a long dark night for the people of Alberta as a result today finally we are seeing some morning light".

Kinder Morgan Pipeline Construction project would start next September and scheduled for completion in late 2019, when Justin Trudeau would go for his next poll.